Beauce Gold Fields (Champs D’Or en Beauce), (“BGF” or the “Company”): is pleased to provide an update on its ongoing exploration program on the newly discovered Ditton placer gold channel and other sectors of interest within the southern Megantic region of Quebec.

Patrick Levasseur, President and CEO of Beauce Gold Fields said, “This summer’s exploration of the Ditton placer gold channel, the Chesham sand & gravel deposit as well as other high priority targets is progressing exceedingly well.” Mr. Levasseur further stated, “Our objectives are to evaluate the potential for an economic placer gold deposit and to find indications that could lead to bedrock gold discoveries.” 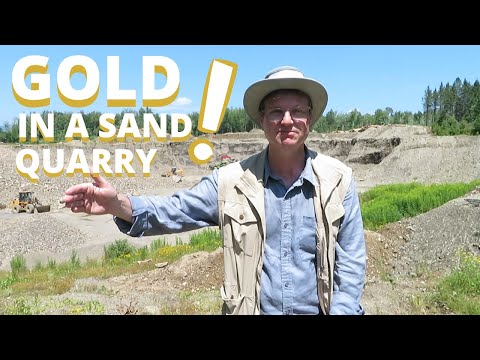 The company completed four lines totaling 2km of seismic refraction geophysics surveys. Three lines laid across the Ditton placer gold channel accurately mapped the depth to bedrock profiles. The geophysics data will allow the Company to position its overburden drill holes throughout the channel to sample at depth to bedrock the glacial till for gold. Preliminary results suggest an important shear zone in the bedrock bottom of the channel that could correspond to a secondary fault that parallels the Bella Fault line. A second objective was successful in validating the accuracy of the historical 1985 geophysics mapping of the channel by Cache Exploration.

The fourth line of seismic refraction geophysics survey was to test a Tertiary channel (Channel A) that is crossed at 2km to the north by the Mining Brook 19th century placer gold mine that produced 25,000 ounces of gold from just a small stretch of the creek. Channel A has not been drilled and remains unexplored.

To date, the Company has processed over 180 bulk samples consisting of 200 litre barrels of glacial till collected from overburden excavations along the Ditton placer channel, the Chesham sand & gravel deposit as well as the Emberton and other high-priority targets (BGF press releases February 23, 2022 and May 24, 2022). The samples were brought to a field sampling station to be processed through a high banker wash plant and sluices to reduce the samples to concentrates.

Three trenches have been excavated on the floor bottom of the Ditton gravel pit to expose fractured and heavily sheared volcanic rock. The Company used a suction dredge and a sluice apparatus to collect and concentrate compact gravel samples possibly of tertiary origin.

The concentrates will be sent to laboratories for further gold extraction through various methods of gravity separation.

Due to the unsatisfactory performance of the drill operators with the geothech drill, the Company decided to stop the drilling at the first hole at 23.8 meters. Drilling is due to resume in mid-September using a Sonic drilling platform.

With Sonic drilling, the Company will drill with ease through boulders and bedrock. It will also allow for the recuperation of continuous in-situ 6-inch cores of overburden samples. The previously announced 50 geotech drill holes will be reduced to 13 Sonic drill holes. Regardless of the reduced number of holes, the larger 6-inch diameter Sonic drill cores should result in a similar volume of material to be sampled.

About The Ditton Placer Channel

The epicenter of the discovery is a cross-section of the placer channel along Rang Dix road near the town of Chartierville, Quebec. The channel is located 4 km east of the historical Mining Brook placer gold mine and 6 km northwest of the US New Hampshire border. It is also located 115 km south of the Company’s Beauce Gold project in St-Simon-Les-Mine.

The insight that led to the discovery was brought by compiled analysis of the Company’s exploration of the Ditton quarry followed by a sampling program that recovered gold from every sample taken throughout the quarry (BGF press release January 20, 2022) and from the study of 1980’s historical exploration reports of the regional geology revealed that the quarry was an excavated pit of an Eastern lip of an exposed layer of a Tertiary placer channel. (GM42843).

In 1985, Cache Explorations undertook 36 km of geophysics throughout the Ditton & Chesham counties to study the placer gold occurrence surrounding the Mining Brook 19th century placer mines. The purpose of the seismic program was to define the depths to bedrock and the thickness of the glacial drifts Quaternary overburden cover to interpret the substructure bedrock topography. The gold deposits were thought to be located in deep Tertiary channels where gold concentrations would be found deep at/or close to bedrock and at such depths that the glacial scouring would have missed by overriding such deep channels. A 4.98 km survey line along Rang Dix road identified 4 Tertiary channels. Of the Churn drill holes were put down to the trough of the channels of which only one hole returned significant gold values. Churn drill hole 85-7 (GM42843) 400m west of the Ditton quarry intercepted a gold zone at 10.4m to 20.2m deep that returned 269 gold grains. Cache continued to focus on Mining Brook exploration and for reasons not known to the Company, did no follow-up work to the Rang Dix anomalies.

The potential size of the channel can be inferred by two studies commissioned by the Provincial government to measure surface sand and gravel deposits in Southern Quebec. According to the MERQ (Ministry of Natural Resources), the larger area (NE-SW) would be 1,800m long X 500m wide with an average depth of 5m. While that of UQAM University, the gravel deposits would be oriented more E-W and would measure 700m in length X 400m wide and an average depth of 5m. However, as implied by the Cache Exploration drill hole 87-7, the depth and the corresponding volumes of the channel would be significantly greater.

The Bella Fault line is estimated to run along strike 1 km east of the placer channel where Cache Exploration in 1985 put down 3 diamond drill holes (DDH) along Rang Dix road to test a strong shear zone. The holes intersected andesites containing numerous quartz stringers mineralized with pyrite and much tourmaline. Of interest, in the drill log for DDH number S-2 states that visible gold was noted at 240 meters (GM42843). Cache did not complete the recommended follow-up drilling to test this anomaly.

Jean Bernard, B,Sc. Geo., is a qualified person as defined by NI 43-101 who has reviewed and approved the technical information presented in this release.

Beauce Gold Fields is a gold exploration company focused on placer to hard rock exploration in the Beauce region of Southern Quebec. The Company’s objective is the trace old placer gold workings back to a bedrock source to uncover economic lode gold deposits. The Company’s flagship property is the St-Simon-les-Mines Gold project site of Canada’s first gold rush that pre-dates the Yukon Klondike. The Beauce region hosted some of the largest historical placer gold mines in Eastern North America that were active from 1860s to the 1960s It produced some of the largest gold nuggets in Canadian mining history (50oz to 71oz). (Source Sedar: 43-101 Report – Beauce July 4th 2018, , Author B. Violette)

MiningIR host a variety of articles from a range of sources, our content, while interesting, should not be considered as formal financial advice. Always seek professional guidance and consult a range of sources before investing.
James Hyland, MiningIR
tags
Beauce Gold Fields, Gold, Quebec
Share