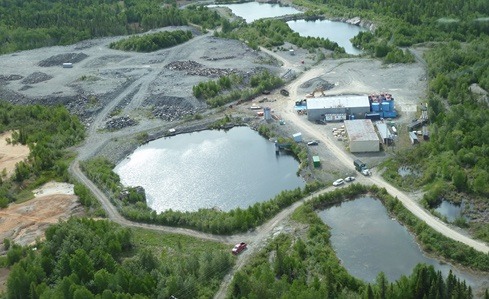 Granada Gold Mine has provided some interim results from their ongoing drill program at their 100% owned gold deposit in Rouyn-Noranda in Quebec, Canada. Drill hole GR-19-C intersected a high-grade zone over 15 metres of near surface core length with 7.67 grams per tonne gold on the extended Long Bars zone.

The mineralized zone is composed of smoky quartz veins adjacent to a porphyry dyke intruded by multiple quartz veinlets south of the altered sheared conglomerate.

Discussing the finding, Granada’s President and CEO, Frank J. Basa, stated: “These preliminary results highlight the potential of near-surface, high-grade mineralization and continue to support higher grades that are in line with historic production grades of 8 to 10 grams per tonne gold when it was mined in the 1930s from the two shafts. The Company’s earlier drill programs were designed to define structures. Drill holes intersected the mineralized structure perpendicularly. This recent program was designed to unlock the higher-grade potential of mineralized intersections near surface identified from previous drill holes.”

About Granada Gold Mine Inc.

Granada Gold Mine Inc. continues to develop its Granada Gold Property near Rouyn-Noranda, Quebec which lies on the highly prolific Cadillac Break -the source of more than 75 million plus ounces of gold production in the past century, and which cuts through the north part of the Granada property. The property includes the former Granada Gold Mine which produced more than 50,000 ounces of gold at 10 grams per tonne gold from vein zones 1, 2 and 5 in the 1930’s before a fire destroyed the surface buildings. Approximately 120,000 meters of drilling has been completed to date on the property, focused mainly on the extended LONG Bars zone which trends 2 kilometers east-west over a potential 5.5 kilometers of gold- mineralized structure. Drill intercepts have been at close to perpendicular to the vein zones. Drilling was focussed on defining lateral and depth extent of the structures along an East-West trend. The mineralized package has been determined to reach up to 400m thick and contains between 9 and 22 distinct vein zones.

The Company has a 43-101 resource and is in possession of all required permits required to commence the initial mining phase, known as the “Rolling Start”, which allows the company to mine up to 550 tonnes perday. Additional information is available at www.granadagoldmine.com

Determining the true price of lithium

Whats hot among this Autumn’s mining and resource listings on the...

Women In Mining announce the “100 Global Inspirational Women in Mining”...