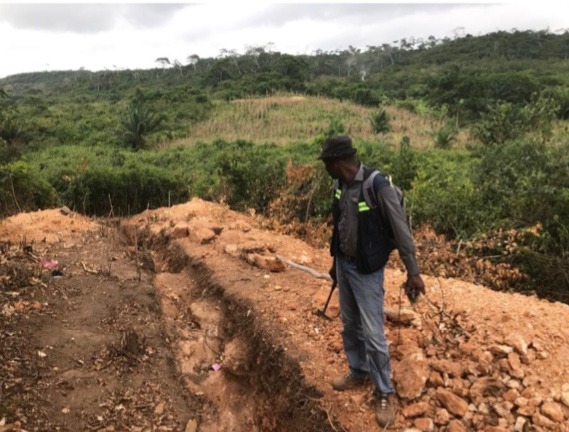 IronRidge Resources has announced some positive news from their current drilling and exploration work across their Cape Coast lithium portfolio in Ghana, West Africa

The company, who have a number of gold and lithium projects in Africa under development, have announced they’ve completed 8000m of their 13,200 planned third phase reverse circulation (RC) drilling programme.

New pegmatite discovery at the Ndasiman target approximately 10km west of Ewoyaa; trenching defines 700m strike and up to 100m apparent width. No visible spodumene has been observed in trenching, however the pegmatites are strongly weathered. Channel sampling has been completed along the trenches with assays pending

New pegmatite discovery at the Krofo target approximately 3km north-west of Ewoyaa; trenching defines 400m strike and up to 25m apparent width. No visible spodumene has been recorded at Krofo, however amblygonite, a high-grade lithium fluorophosphate mineral has been identified in outcrop. This is considered geologically significant as it potentially indicates an evolved and zoned lithium pegmatite field.

Commenting on the methodology the company has used, Len Kolff, Chief Operating Officer of IronRidge, stated that it was their regional soils programme including in-house laser-induced breakdown spectroscopy (LIBS) and the ue of portable X-ray fluorescence (pXRF) combined with the regional airborne magnetics survey and field mapping that has made these targeted discoveries possible.

While this is all great news from the field – validating the approach the company is taking, it’s that maiden resource estimate due in Q1 that we will be staying tuned for.

IronRidge Resources is an African focused, diversified minerals exploration company that creates shareholder value through the discovery, development and monetisation of mineral projects through African operational, exploration and studies expertise, large-scale contiguous tenure positions and an emphasis on geological and/or jurisdictional frontier provinces. We have recently made significant discoveries in the lithium and gold exploration sectors. Our Ghanaian Cape Coast Lithium Project has initially delivered exciting and potentially world class lithium grades and drill intersections, whilst in Chad, we have uncovered a substantial gold bearing province with a surface footprint rivaling some of today’s largest operating gold mines

Find out more at https://www.ironridgeresources.com.au

Why diversity is benefiting the mining industry, with Nichole McCulloch