MAX RESOURCE CORP. is pleased to report initial results of the high-resolution ground Induced Polarization (“IP”) survey. The IP chargeability correlates with the two URU-Central copper-silver rich discoveries and extends at least 200m below surface. The IP is to be integrated into a detailed geological and structural three-dimensional model for the upcoming drill program (refer to Figure 2 and 3D video below).

The second discovery, URU-CE is located 750m to the east of URU-C, consisting of substantial sized outcrops with visible copper mineralization +15m wide, trending SSW for +250m of strike, open in all directions (refer to Figures 3 and 4 video).

“The initial IP survey has achieved the objectives of defining the vertical dimensions of the primary chalcocite-bearing mineralized body at the two URU-Central discoveries. Max is preparing drill sites and planning to mobilize the diamond core drill rig late next month, initiating the first ever drilling program targeting copper-silver mineralization on its URU mining concessions,” commented Max CEO, Brett Matich.

Initial results show the primary chalcocite mineralization extends from surface and displays a clearly defined chargeability contrast with the known unmineralized barren wall rocks. The IP results indicate that the defined surface mineralization appears to continue both along strike and at least 200m vertically at the two parallel discoveries (URU-C and URU-CE). 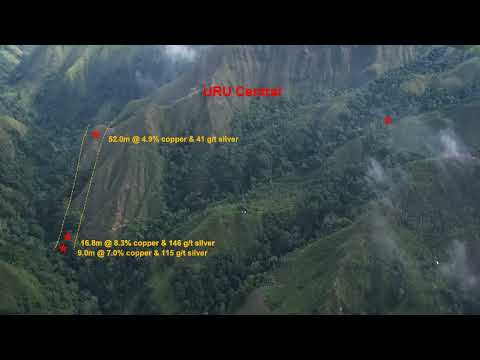 Max is proactive, with the corporate goal of moving the Cesar basin towards the mining of copper, the key metal for the Colombia’s transition to clean energy.

Max is focusing on three major copper-silver districts individually located along the CESAR 90-kilometre-long belt, with the objective of expanding the zones and defining drill targets:

Geologically, Max interprets the sediment-hosted copper-silver mineralization in the Cesar basin to be analogous to both the Central African Copper Belt (CACB) in the south and the Kupferschiefer deposits in Poland of the CESAR copper-silver belt.  Almost 50% of the copper known to exist in sediment-hosted deposits is contained in the CACB, including Ivanhoe Mines Ltd (TSX: IVN) 95-billion-pound Kamoa-Kakula discovery in the Congo.

Kupferschiefer, the world’s largest silver producer and Europe’s largest copper source, is a mining orebody ranging from 0.5 to 5.5m thick at depths of 500m, grading 1.49% copper and 48.6 g/t silver. The silver yield is almost twice the production of the world’s second largest silver mine.

Source: Central African Belt Descriptive models, grade-tonnage relations, and databases for the assessment of sediment-hosted copper deposits with emphasis on deposits in the Central Africa Copperbelt, Democratic Republic of the Congo and Zambia by USGS 2010. Kamoa-Kakula by OreWin March 2020. World Silver Survey 2020 and Kupferschiefer Deposits & Prospects in SW Poland, September 27, 2019. Max cautions investors that the presence of copper mineralization of the Central African Copper Belt and the Polish Kupferschiefer are not necessarily indicative of similar mineralization at CESAR.

The Company’s disclosure of a technical or scientific nature in this news release was reviewed and approved by Tim Henneberry, P Geo (British Columbia), a member of the Max Resource Advisory Board, who serves as a qualified person under the definition of National Instrument 43:101.

For additional information on Max Resources contact Tim McNulty at +1 (604) 290-8100 or by email info@maxresource.com or Rahim Lakha at rahim@bluesailcapital.com

MiningIR host a variety of articles from a range of sources, our content, while interesting, should not be considered as formal financial advice. Always seek professional guidance and consult a range of sources before investing.
James Hyland, MiningIR
tags
CESAR, Colombia, Copper, Gold, Max Resource Corp., Silver
Share