A stern warning about how the mining industry is being left behind whilst data becomes increasingly important.

The age of combustion is at an end, and the age of the machine is about to begin. The world is changing at an incredible rate; each day our computing power grows exponentially with GDP growth in Africa and the East; the world is getting ready to shift gears once again. It’s about time the mining industry woke up and took note, for there is money to be made and revolutionary methods to be implemented.

For many years, every three months a miner would be sent out with a tape measure to record the height of the tailings pile, thus calculating the value of the material mined. This is still in practice. Philippa Malmgren’s (https://twitter.com/DrPippaM) company, H Robotics, has tested and is now releasing a purpose-built, multi-functional, easy-to-use drone designed and built for the industry. It can fly in the cold, in the rain, and in the wind. It’s ease and variety of uses means companies do not need expensive experts; current employees are perfectly capable of operating it. This simple drone will allow huge amounts of data to be collected, from tailing pits to drainage patterns of fluids to mapping the topography of the surrounding area. And with a mobile phone app stockholders will be able to have a guided tour from the comforts of the office. 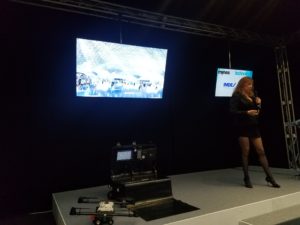 This is a clear example of the tectonic change that is about to happen when we go from mining metal to mining data. As Putin said, AI is the frontier in geopolitics. Whichever country can crunch the data will control everything. This data comes from everywhere, your hover is broadcasting the dimensions of the house, your Alexia is recording everything and is now being subpoena in murder trials, RFID chips the size of needle eyes tag where you wear the clothes, and your mobile phone owns your life. To tackle this, military spending has surpassed cold war levels; not on bullets and tanks but on supercomputers and programs. The USA’s supercomputer summit can, in 1 second, do what would take a human 6.3 Billion years. It’s currently store at the oak ridge with the American

nuclear arsenal. China is building a quantum computer that can process 1 million times the earth’s current computing power. These are astronomical figures and that’s not even getting into the disruptive potential of blockchain economies, especially as a method to write off debt similar to what UK parliament did in 1803 when they introduced paper money, both metaphorically and literally when they burnt down the old system.

I can’t stress this enough and this short article does not do this subject justice. The mines of the future will be as much about metal as they will be about the data they collect and how they process that data.

MiningIR host a variety of articles from a range of sources, our content, while interesting, should not be considered as formal financial advice. Always seek professional guidance and consult a range of sources before investing.
James Hyland, MiningIR
tags
Geopolitics, Mines
Share