Mines and Money London: China’s one Road one Belt policy’s effect on central Asia and Russia. 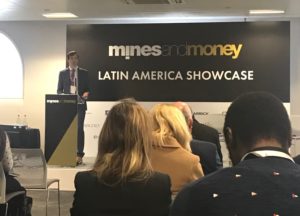 The Speaker Georgy Fotin, Far East Investment and Export Agency, was clear from the start that this talk would focus on the far east mining sector of Russia. This area is the same size of 11 Frances and stretches from the Pacific ocean to the Lake Baikal. With a population of only 8 million it is one of the most under populated and under developed areas in the world. As such it is a priory for the Russian government to help boost investment and extraction of the incredible natural wealth in the area. It is the worlds number one region for untapped diamond and gold deposits.

To encourage investment the government has set up 18 low tax areas along with 21 regions with stream line business legislation. So far their are more then 50 projects in brown and green fields stages in the area the biggest activity was the purchase of the Baimskaya project by Kaz minerals for 900Million US Dollars this year.

So how does the Belt and Road initiative fits into this.  Well the 2015 joint deceleration between China and Russian is aimed to bring development to this remote region by Chinese firms and the low tax zones are to encourage the west to join in. This will be aided by the Eurasian Economic Union promoting free trade between Belarus, Kazakhstan, Armenia and Russia which the Chinese have pledged to support.

The final statement and key point of this talk were:

Should the government investment in the areas infrastructure continue it is likely that greater numbers of western companies will start to move over as the untapped natural resources are simply too valuable to leave untouched.

MiningIR host a variety of articles from a range of sources, our content, while interesting, should not be considered as formal financial advice. Always seek professional guidance and consult a range of sources before investing.
James Hyland, MiningIR
tags
Mines and Money
Share