If you missed out on Day Two at Mines and Money London, we have a catch-up, Chris Hinde from Mining Beacon has summarised the key points.

The second day of this year’s Mines and Money conference in London included a session that highlighted transparency as the key in bridging the trust gap that has long existed between miners and civil society.

The second day of the four-day Mines and Money (M&M) London conference started with a keynote presentation from Tom Butler, the CEO of the International Council on Mining and Metals (ICMM). This was followed by a panel discussion on the same crucial issue for the sector; how well are miners and governments bridging the trust gap?

Mr Butler, who was previously global head of mining at the IFC, started his presentation (which will be the subject of a separate report) by noting that trust generally was at an all-time low. Mr Butler referred, in particular, to this year’s Edelman Trust Barometer, which revealed a world of seemingly stagnant distrust. Over two-thirds of the 28 markets surveyed now lie in ‘distruster’ territory, up one market from last year.

In its report last January, Edelman concluded that the world is “moving apart in trust”. The report noted that in previous years “market-level trust has moved largely in lockstep, but for the first time ever there is now a distinct split between extreme trust gainers and losers”. No market saw steeper declines last year than the US, with a 37-point aggregate drop in trust across all institutions. At the opposite end of the spectrum, China experienced a 27-point gain, more than any other market.

Globally, nearly 70% of respondents among the general population worry about fake news or false information being used as a weapon, and 59% say that it is getting harder to tell if an item of news was produced by a respected media organisation. In this environment, media has become the least-trusted institution for the first time in Trust Barometer history. 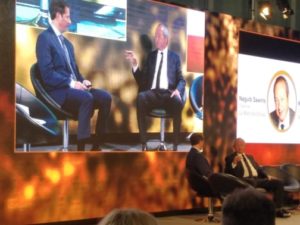 With this worrying backdrop, Mr Butler admitted that the ‘trust gap’ in mining was a consistent theme. He stressed, however, that although there was enough of a problem to worry about, it was “not all bad news”. ICMM’s members operate 650 mines and have adopted 38 new principles that will address some of the trust issues facing the industry. The ICMM is also in the process of drawing up a new code of practice that will document what is expected of members (down to site level).

Mr Butler identified three areas on which to focus; transparency and accountability, engagement, and values and purpose. The first addresses the need to provide relevant data to stakeholders, the second the need to be humble and clear, and the third (“probably the most important”) the need for executives to set the tone. CEOs, Mr Butler stressed, need constantly to articulate their company’s values.

ICMM believes that over half of a company’s reputation is linked to the performance of its peers, so trust in the industry tends to rise, and fall, together. As Mr Butler commented, “trust arrives on foot but leaves on horseback”.

In addition to Mr Butler, the subsequent panel debate comprised Thomas Holl, a portfolio manager with Blackrock, Brian Chicksen, VP of sustainability at AngloGold Ashanti, Gillian Caldwell, the CEO of Global Witness, and the honourable Francis Gatare, the CEO of Rwanda Mines. The panel was moderated by Daniel Litvin, the managing director of Critical Resources.

Ms Caldwell led off the panel discussion by welcoming the ICMM’s initiatives but commented that the “challenge remains between articulation and implementation”. She identified three main ways to bridge the trust gap (all of which were related to transparency); publish all contracted information, publish beneficial ownership and align due diligence studies.

Mr Gatare stressed it was important for everyone to recognise that everyone in a country has a claim to its natural resources, and that these resources are finite. Trust breaks down when these principles break down, and insufficient resource rent finds its way to the society affected by the mineral extraction. Mr Holl agreed, but posed the question of what is a fair distribution of these funds.

Mr Chicksen added that companies needed to think of themselves as an integral part of local society, and to conclude deals that are not only fair but are perceived to be fair. He identified two critical issues; ensure local participation in the value chain, and leverage local core competencies, such as land management.

All of the panellists identified short-term appraisals and market evaluations as a root part of the problem for issues that are long-term in nature. In this regard, Mr Holl called on directors to ensure that companies take a longer-term view of their responsibilities. All also agreed that securing the trust of stakeholders is the most important issue facing the global mining industry.

MiningIR host a variety of articles from a range of sources, our content, while interesting, should not be considered as formal financial advice. Always seek professional guidance and consult a range of sources before investing.
James Hyland, MiningIR
tags
Mines, Mines and Money
Share