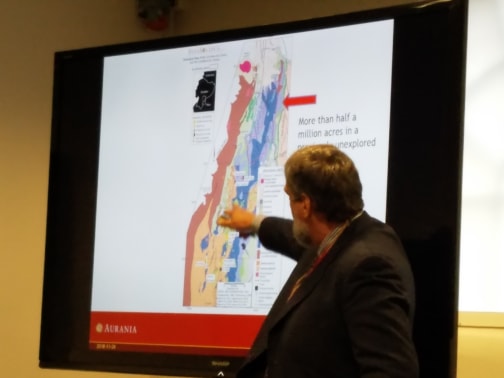 Ecuador, the home of the lost cities of Logrono and Sevilla del Oro, is said to be richer than the entire Spanish empire.  These mythical lost cities are being hunted by Keith Barron, a man with extensive knowledge not just of the geology of this area but also its history.

First visiting Ecuador in 1998 to avoid political violence in Venezuela, Keith enrolled in a Spanish language course and was billeted with the foremost authority on the conquistador conquest of Ecuador. He developed a deep interest in these lost cities and an desire to validate the effort in 1981 only a decades before the lost city of Nambija was rediscovered by two boys pig hunting in the jungle. It very quickly declined into a shanty town operation with 25,000 people descending upon it in search of gold. To prevent this, the government is trying to locate more of the cites and Keith is leading the charge. From the halls of the Vatican City Library to the archives of Seville, he searches for more information about the two lost treasures. He is now getting close.

This wouldn’t be possible in other South American countries, but Ecuador has recently become a very low-risk location with major companies such as Glencore, BHP, and SolGold investing in the area. The country boasts excellent jurisdiction, huge areas of unexplored land, and low risk. As Keith states, if you want to find an elephant of a deposit you need an elephant package of land (he currently has half a million acres of land held ready for exploration).

His last discovery of Fruta del Norte by his company Aurelian Resources saw its share price go from $0.46 to $43 a 92000%. He is now searching further north along strike of the same geology of his previous discovery. In fact, his management team has found 18Moz of the 26Moz in the Contiguous Mineral belt, a country that is significantly unexplored and has a history of being immensely gold-rich. What more do you need?

A guide to financings: The what, why and how