Mines and Money London: The Uranium Market – What additional political, supply and demand catalyses could make a sleepy investor pay in 2019? 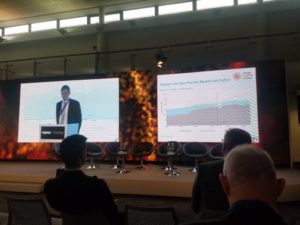 The demand for Uranium is still increasing globally as it produces no C02 and is a better alternative for coal as a baseline energy. With China producing 6-8 new reactors a year in an effort to clean up the war on smog and India following close behind, even the recent Fukushima plant disaster has not turned anyone off. Japan has recently restarted 9 of its reactors and approved another 6. The demand is increasing but what about supply?

Currently, 9 producers make up 90% of the Uranium market with the biggest share going to Kazakhstan. 37.5 %, of their market is dominated by Kazatomprom, a state-run industry. With a lot of the 10-year leases signed in early 2000 coming to an end, utilities are looking carefully at the potential spot. Long-term prices, however, are looking for a better price with spot price at 27.7/lb $US not being sufficient to encourage the restart of many brownfield sites and therefore slowing production. Kazatomprom has reduced its output by 10%, MacArthur river has been shut down and the Canadian Cameco company, the second-biggest producer, is reducing output. This decrease in supply has already led to a deficit this year in Uranium production and it is likely to increase.

The world could turn to the 1.2-2Billion/ Lb. Unfortunately, these are mostly controlled by China so any figures are sceptical. Whatever the actual figure, China is unlikely to sell as it will rely on this to help guarantee future development of its ‘cookie cutter module reactors’ as it tries to export them overseas.

So, we have a market-ending long-term contracts, a massive decrease in the production capacity of the world due to mine shout down and low prices, increased demand as a solution to smog and global warming, and a product currently at a very low price. Surely the only way is up?

MiningIR host a variety of articles from a range of sources, our content, while interesting, should not be considered as formal financial advice. Always seek professional guidance and consult a range of sources before investing.
James Hyland, MiningIR
tags
Mines, Mines and Money, Uranium
Share