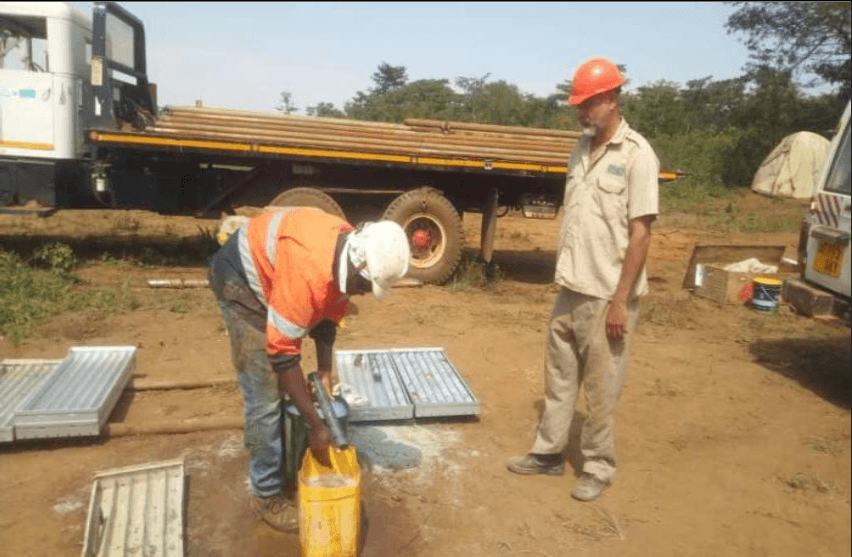 The objective of Phase II is to identify gold mineralization in the range of 50 to 200m below the pit bottom of the open pit. The two previous drill holes in Phase II are Holes 13-3 and U22-1. All three holes have encountered significant mineralized widths that include notable intersections of high grade.

Headline figures from the latest hole include:

Please note the intersections reported here are a down-hole length and may not represent true width but the true width is estimated to be 50 – 60%.

The Chairman of Tanzanian Gold, Jim Sinclair, commented: “The systematic drilling we are doing below the pit bottom has, to date, yielded exceptionally robust results. We will be using these results to help us formulate a Phase III program that will, in part, be directed at testing what we are calling the Ultra-Deep.”

The company also noted it would shortly be starting a program of down-the-hole geophysics to add further detail to their geological model of the deposit, and to refine their drill targets for phase III of their drilling program.

About the Buckreef Gold Mine re-development project

The Buckreef Gold Mine Re-Development Project was acquired from the Tanzanian State Mining Company (Stamico) in December 2010. Under a Heads of Agreement concluded with the state-owned company, Tanzanian Royalty has the right to earn a 55% interest in Buckreef with Stamico holding the remainder.

The Buckreef Project is located in north-central Tanzania immediately to the south of Lake Victoria and 110km southwest of Mwanza. Access to the Buckreef project is by ferry across Smiths Sound and then via unpaved roads and an onsite airstrip. The project area comprises the dormant Buckreef Gold Mine and four prospects with known mineralization: Buckreef, Buziba, Tembo and Bingwa.

The Buckreef and Buziba gold deposits are classified as medium grade orogenic gold deposits hosted by mafic volcanic sequences of the east-west trending Archaean Rwamagaza Greenstone Belt (RGB) within the Lake Victoria Goldfields (LVG) of the Tanzanian Craton. The Buckreef deposit is hosted by a steeply dipping, northeast-southwest trending brittle-ductile shear zone. The Buziba deposit is located 25km east of the Buckreef prospect. Gold mineralization at Buziba is associated with quartz vein arrays that occur in altered shear zones in mafic rocks and as extensive stockworks in the felsic porphyries.

The Buckreef Project is situated within the LVG of northern Tanzania which consists of a number of east-west trending, linear, Archaean greenstone belts. The LVG is the third largest gold producing region of Africa, surpassed only by the Witwatersrand Basin in South Africa and the Tarkwa region of Ghana. Numerous gold occurrences have been identified in the LVG and new discoveries continue to be made. Since 1998, when the first mine, Golden Pride was commissioned, four additional large scale mines namely, Geita, Bulyanhulu, North Mara, and Tulawaka have come into commercial production. Geita and Bulyhanulu are considered world-class deposits, together representing in excess of 35Moz of gold resources.
The greenstone belt sequences have geological and structural similarities to major gold districts in the Canadian Shield (Val d´Or, Kirkland Lake) and the Yilgarn Craton in Western Australia (Kalgoorlie, Laverton, Leonora, Kambalda and Southern Cross).

The Buckreef Project area covers the eastern portion of the east-west trending RGB which forms part of the Sukumaland Greenstone Belt (SGB). Aeromagnetic data and minor outcrop indicate the presence of a number of elongate discontinuous, sheared ultra-mafic bodies which could represent either intrusive bodies or the cumulate portions of thick, magnesium-rich basaltic lava flows.
Large batholithic granites intrude the RGB and the possibility exists that the RGB forms part of a much larger belt that has been dissected by the intrusions. Aeromagnetic surveys over Buckreef indicate the presence of granites at depth.
The tectonic evolution of the RGB is very poorly understood. Aeromagnetic data reveals several generations of crosscutting, late stage, brittle-ductile faults and shears which offset flow stratigraphy and have locally been intruded by the felsic porphyries and by a late stage dolerite dykes.
The weathering profile across the belt is relatively shallow across both Buckreef and Buziba Prospects. The RGB, in general, is covered by a thin layer of alluvial regolith which is amenable to standard soil sampling techniques.