The Alain Review: Portfolio manager and head of mining from Finance SA Alain Corbani wraps up an exciting August in the commodities market.

Stay up to date with Alain’s monthly segment for MiningIR HERE. 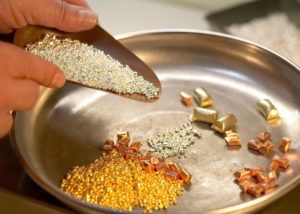 As of August 28, 2018, gold net speculative positions were at minus 3 million ounces, a five-year low, resulting from a sharp rise in short futures positions (a historical record and at levels almost twice as high as those reached in 2013 and 2015) in response to the appreciation of the US dollar (US Dollar Index up 0.62%) correlated to a new record high of non-commercial short contracts in the 10-year US treasury notes. Real interest rates, in the meantime, trended down.

Q2 2018 financial results are now behind us. Adjusted net margins showed a slight contraction in line with the average gold price, which fell 1.73% over the quarter (to settle at $1306 an ounce). These latest figures demonstrate once again that financial discipline remains a priority for the industry.

The $1200 critical price environment has created opportunities to either develop strategic partnerships or merge; To mention a few, La Mancha announced the investment of US$125.7 million in Golden Star Resources (NYSE MKT: GSS) to acquire a 30% stake in the company which operates the Wassa and Prestea underground mines in Ghana.

The cash infusion is dedicated to support Golden Star in accelerating exploration and resource definition drilling and to create a strong platform for the business to target further growth. Coeur Mining, Inc. agreed to acquire all of the issued and outstanding securities of Northern Empire not currently owned by Coeur. Northern Empire’s principal asset is the Sterling Gold Project located in Nevada, with a total inferred gold resource of approximately 709,000 ounces averaging 2.23 g/t. The acquisition adds multiple gold deposits to Coeur and expands its historical focus on Nevada.

While the mood is low-spirited, some visionary industry leaders prepare for the next leg up in this bull cycle by acquiring marginal but strategic deposits; Newmont Mining Corp. acquired NOVAGOLD’s 50% interest in Galore Creek assets for $275 million.

The weakening price of gold over the past four months can be entirely attributed to the appreciation of the US currency. While gold miners had resisted remarkably well (relative outperformance in June) they finally gave ground in August when the price of gold fell below the $ 1200 threshold, potentially questioning the established multiyear upward trend in profitability demonstrated by the industry.

We maintain and reiterate our constructive view on the sector based on the recognition that in the context of increasing twin deficits, a rising price environment and public debt in the vicinity of 100% of GDP, real interests will remain low for a long time, the US currency is to depreciate and the price of gold and gold mines to rise. This late summer doldrum looks very much like the fall of 2015 when the very negative sentiment prevailed. Benjamin Graham* wrote:

“the intelligent investor is a realist who sells to optimists and buys from pessimists”.

This quote, more than ever describes the current configuration.

Discaimer: MiningIR.com hosts articles from a range of sources, our content, while interesting, should not be considered as formal financial advice. While no money changed hands with MiningIR for the publication of this article, Our guest writers are all active traders and professionals in the Mining industry and may hold shares or personal interest in the companies they review. Always seek professional guidance and consult a range of sources before investing.

MiningIR host a variety of articles from a range of sources, our content, while interesting, should not be considered as formal financial advice. Always seek professional guidance and consult a range of sources before investing.
James Hyland, MiningIR
tags
Alain Corbani
Share