Highlights are as follows:

Alan Carter, Cabral’s President and CEO commented, “These latest RC results from the PDM oxide blanket are important for two reasons. Firstly, they further demonstrate the presence of a higher-grade core within the unconsolidated oxide blanket. Secondly, they lend further support to the presence of a second primary mineralized zone in the underlying basement granitic rocks at least 250m in length and sub-parallel to the initial zone of primary basement gold mineralization below the oxide blanket. Whilst we currently have no idea how large the primary gold deposit is at PDM, these results confirm the presence of a second primary zone of gold mineralization in basement granitic rocks underlying the oxide blanket at PDM. Both the gold-in-oxide blanket and the two zones in the primary basement rocks are open to the north and may extend under an area of historic artisanal workings.”

The gold-in-oxide blanket at PDM was initially identified in August 2021 (see press release dated August 10, 2021), and a program of diamond drilling, initiated in late 2021, subsequently identified an underlying zone of primary gold mineralization in the unweathered granitic basement rocks similar to that at MG and Central.

The current RC drilling program at PDM was designed to further define the limits to the high-grade core within the overlying gold-in-oxide blanket, and has confirmed the presence of a high-grade core area.

RC0327 returned 15m @ 1.5 g/t gold, including 1m @ 19.1 g/t gold, from 40m depth in oxidized and weathered material. This hole is located approximately 250m northwest of RC0310 which previously returned 13.0m @ 4.6 g/t gold from 25.0m in oxide material, including 1.0m @ 49.2 g/t gold from 34.0m (Figure 2). Similarly hole RC0333 returned 32m @ 0.5 g/t gold and is located between RC0310 and RC0327. These holes lend further support to the existing evidence suggesting the presence of a larger high-grade core to the blanket and a possible additional mineralized structure in the underlying granitic rocks which may be parallel to the main mineralized zone. Diamond drilling of the basement mineralization, which has been undertaken to date at PDM, has not tested this far north.

RC0327 is also located just 40m south of extensive historic artisanal placer gold workings. These are approximately 200m wide and are reported to have been very rich at this location, suggesting the primary mineralization, and possibly the oxide blanket, could extend beneath the historic workings to the north.

RC0324 was drilled on the northwest end of the PDM oxide blanket and approximately 200m northwest of the most northerly diamond-drill intercept (DDH275 returned 18m @ 2.5 g/t gold) that has tested the initial primary basement discovery. The higher grades from hole RC324, (11.0m @ 3.1 g/t gold from surface in oxidized and weathered material, including 3.0m @ 10.5 g/t gold) suggest that the initial primary zone could extend at 200m, or more, further to the northwest than indicated thus far from current diamond drilling. Whilst this requires confirmation through additional diamond drilling, current drill results suggest that the initial primary zone at PDM could be over 400m in strike length and remains open to the southeast and the northwest.

Other significant drill results which further define the higher-grade core to the gold-in-oxide blanket at PDM (Figure 2, Table 1) include;

Results are pending on 12 diamond-drill holes at MG.

Results are pending on 14 diamond-drill holes at Machichie.

Results are pending on six diamond-drill holes at the Indio target and additional drilling is planned.

The preparation of an updated resource estimate for the Cuiú Cuiú project is in progress. The NI 43-101 estimate is being carried out by SLR Consulting (Canada) Ltd. and is expected to be completed during August.

The Company is a junior resource company engaged in the identification, exploration and development of mineral properties, with a primary focus on gold properties located in Brazil. The Company has a 100% interest in the Cuiú Cuiú gold district located in the Tapajós Region, within the state of Pará in northern Brazil. Two gold deposits have so far been defined at Cuiú Cuiú and contain 43-101 compliant Indicated resources of 5.9Mt @ 0.90 g/t (200,000 oz) and Inferred resources of 19.5Mt @ 1.24 g/t (800,000 oz).

For more info on Cabral Gold, please go to their website at wwww.cabralgold.com or contact CEO Alan Carter at alan@cabralgold.com

INTERVIEW with Alan Carter, President, CEO of Cabral Gold Inc., spoke to us at Mines and Money London to help us understand the potentially huge district play they have in Brazil with two gold deposits and have completed over 25,000 metres of drilling with four drill rigs turning presently. 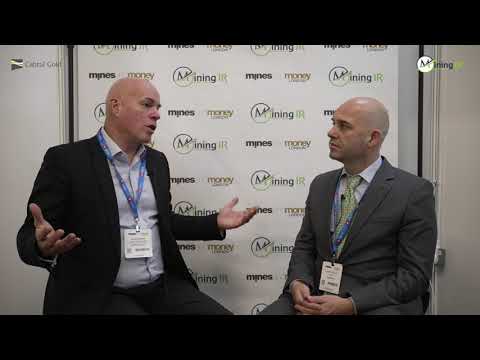 MiningIR host a variety of articles from a range of sources, our content, while interesting, should not be considered as formal financial advice. Always seek professional guidance and consult a range of sources before investing.
James Hyland, MiningIR
tags
Alan Carter, Brazil, Cabral Gold, Cuiú Cuiú Gold District, Gold
Share