“We are grateful to the tireless and dedicated team and crew at site for an extremely productive drill season to date,” stated Marco Roque, President and Chief Executive Officer. “Due to high drill productivity and thanks to the closing of our recent insider-led private placement, we are well funded and evaluating opportunities to increase the number of metres drilled for our 2022 drill campaign. We look forward to reporting initial results from our program in the coming weeks and to updating the market on our final program once the drill campaign wraps up in October.”

The Company’s 2022 drill campaign, which commenced on June 1st, remains ongoing with three active drill rigs and is projected to conclude by late October. The program consists of approximately 50 planned holes totalling 20,000 metres at both the Cassiar North and Cassiar South project areas including regional targets.

To date, a total of 23 holes totalling 7,373 metres have been completed and one hole is in progress at the Taurus Deposit located at the Cassiar North project area. Of the holes completed, 17 holes were step-out holes designed to expand the deposit and six were infill holes designed to confirm continuity of mineralization and to reduce drillhole spacings. While results remain pending for all drill holes, a summary of objectives is presented below by zone (see Figure 1): 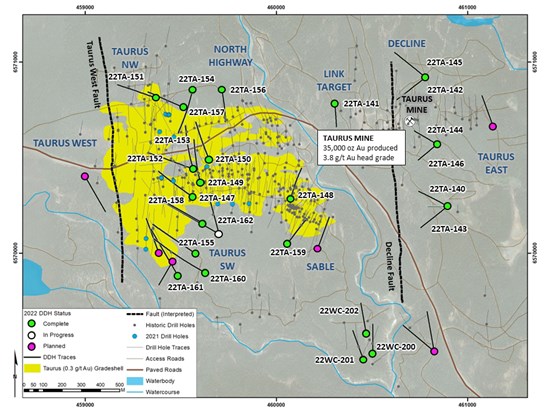 An additional seven holes are planned for the Taurus deposit area (see Figure 1). Four drill holes will be added to Taurus SW with two holes stepping back from drill holes 22TA-158 and 22TA-149 to test the Taurus West zone to the east and south, respectively, of the current 0.3 g/t Au gradeshell. The remaining two Taurus SW holes will be drilled in the southern end of Taurus SW to test the zone at depth and to the south of the current 0.3 g/t Au gradeshell. A fifth hole will be drilled west of the Taurus West Fault, which is believed to have occurred at the same time as gold mineralization, to test for the potential extension of mineralization in the footwall of the Taurus West Fault. A sixth hole is planned at the southeast portion of the Sable Zone to test for the southeastward extension of the mineralization. Finally, a seventh hole will be drilled to test for the eastward extension of mineralization from the historic Taurus Mine.

The Company may expand its exploration program by drilling additional metres at the Taurus Deposit, if seasonal considerations and logistics permit, and is fully funded for an expanded exploration campaign.

A total of 10 holes have been completed at priority vein targets at the Cassiar South project area on Table Mountain with all drill results pending. A summary of completed and planned holes is presented below, broken down by target vein locations (see Figure 2 for drillhole locations): 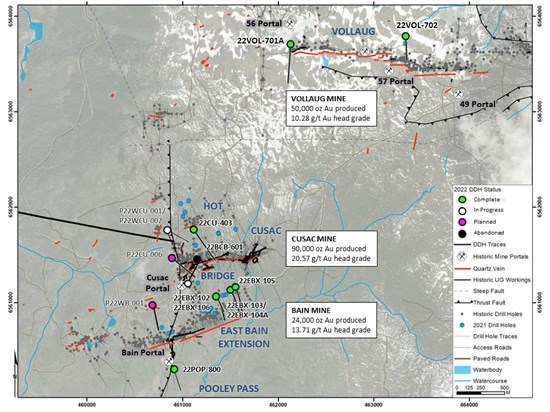 At the regional Wings Canyon target located approximately 500 m to the southeast of the Taurus Deposit on Cassiar North, the Company has completed three drill holes totaling 825 m, designed to evaluate and expand known mineralization. The Company plans to drill additional holes to the target to the east in the hangingwall of the interpreted Decline Fault.

Additional fieldwork is also planned at the Lucky and Snow Creek regional prospects which may include prospecting, sampling and mapping.

Geological and geochemical characterization at Taurus

An initial phase of work is underway to support efforts to better understand the metallurgy of the Taurus deposit by updating geological domains within the deposit. This work involves drill core and assay review to identify mineralization-associated multi-element enrichment and depletion patterns, along with characterization of the mineralogy and structural geology of the deposit to determine controls on gold mineralization. Preliminary results from this phase of work are anticipated this fall and will be followed by a secondary phase of LECO sulphur analysis and cyanide soluble gold analysis to support a geological domain model and provide a foundation for future metallurgical testwork design.

The technical information in this news release has been reviewed and approved by Jill Maxwell, P.Geo., Cassiar Gold Corp.’s Exploration Manager, who is a Qualified Person as defined by National Instrument 43-101.

The Company also holds a 100% interest in the Sheep Creek gold camp located near Salmo, BC. The Sheep Creek gold district ranks as the third largest past-producing orogenic gold district in BC with historical gold production of 742,000 ounces gold at an average grade of 14.7 g/t gold from 1900 to 1951. Minimal exploration work has been conducted since the 1950s.

Cassiar Gold acknowledges, respects, and supports the rights of Traditional First Nations in the lands and communities where we operate.