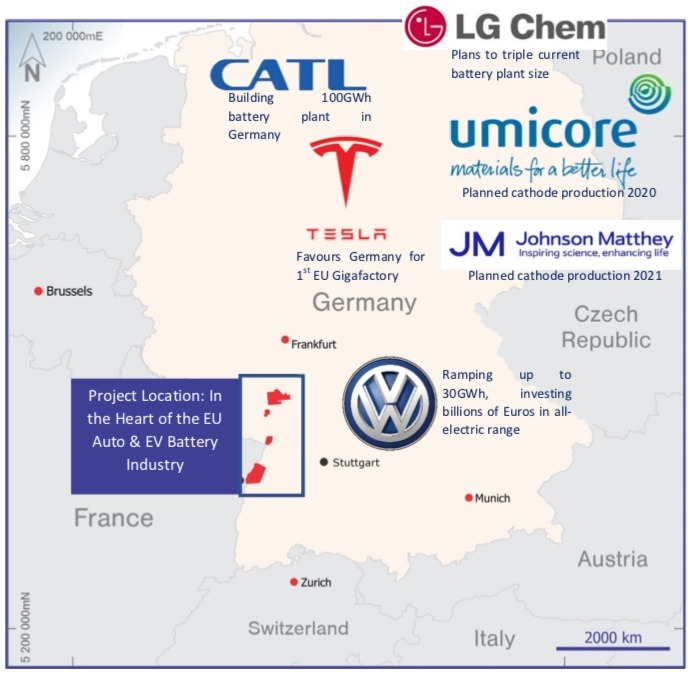 Much has been made recently on the need to invest in lithium battery production globally if the future projected demand for electric vehicles is to be met. With lithium production traditionally focussed in Australia and South America, this has caused something of a dilemma for the European car industry. With demand going up, and projected shortfalls seen for lithium supply in only a few years without further investment in lithium projects, securing lithium supplies closer to hope could very well be a critical part of the car manufacturing process. Has enough been done to invest in the admittedly limited lithium resources within Europe?

Koppar Resources, the Australian junior, has announced it will acquire 100% of Vulcan Energy Resources, which owns the Vulcan Lithium Project. This could see a large, zero-carbon lithium brine production come on line in Stuttgart, close to the heart of the European car industry.

About the Vulcan Lithium Project

The Vulcan Lithium Project is in the Upper Rhine Valley geothermal field in Germany, an area with a rich supply of lithium-rich, hot sub-surface brines. These brines have been sampled extensively at multiple locations throughout the area, with lithium grades often above 150mg/l Li and up to 210mg/l Li (average 161 mg/l, Table 1). These concentrations are similar to the Hell’s Kitchen lithium project in California (owned by Controlled Thermal Resources).

The aim will be to explore and develop the Vulcan Project to produce battery-grade lithium hydroxide from geothermal brines. Subject to confirmation in proposed study work, a direct precipitation process will be used for lithium processing which is quicker and less water and carbon-intensive relative to the evaporative method used in South American salars. The temperature of the brines is anticipated to be an advantage in the development of the processing method.

The importance of low or zero-carbon production.

Finding a source of lithium is one thing but refining it to produce a product suitable for battery manufacture can be time, and resource, intensive. As car manufacturers move towards net-zero carbon production of vehicles, they are spending more time looking at the entire production supply chain for their vehicles – something Volkswagen has recently announced.

Salar lithium operations in South America have traditionally used large quantities of soda ash, mined and transported from the USA, massively increasing the carbon footprint of their operations. They also use large quantities of water in very dry areas, and can take a year or longer for the evaporation process to work.

The Vulcan Project aims to use the heat of the brine itself to produce a renewable energy supply to power the lithium precipitation procedure itself, and for any excess energy produced to be sold onwards to the grid.

Setting this project within the context of anticipated rising demand is critical.

Global lithium demand, driven by high annual compound growth in lithium-ion battery manufacture and usage in vehicles and stationary storage, is set to increase to 1.85 million tonnes LCE by 2028, from a present level of around 0.3 million tonnes (Benchmark Mineral Intelligence, 2019). New lithium processing supply capacity is estimated to be around 1.7 million tonnes by 2028 (Roskill, 2019), indicating a significant shortage. This also assumes that current stated plans for increased capacity will progress on track without technical ramp-up issues, something that has not occurred to date (Roskill, 2019).

This presents an imminent problem for the lithium-ion battery industry, and thus the electric vehicle and stationary storage industries, who are committing multibillion-dollar CAPEX investments to achieve a total of 1.7TWh battery production capacity by 2028 (Benchmark, 2019).

The EU production of battery-grade lithium hydroxide or lithium carbonate is currently nil, yet the EU will require 150kt per annum of LCE by 2023, and 290kt by 2028 (Benchmark, 2019). The majority of lithium supply is controlled by just five companies, all of which are non-EU (SQM, Albemarle, Livent, Tianqi, Ganfeng, Source: Bloomberg).

Koppar is planning to advance the Vulcan Project to a scoping study over the next 12 months, along with acquisition of seismic and geochemical data from across the region.

We’ll be keeping a close eye on Koppar over the coming months. Find out more from them at https://www.kopparresources.com