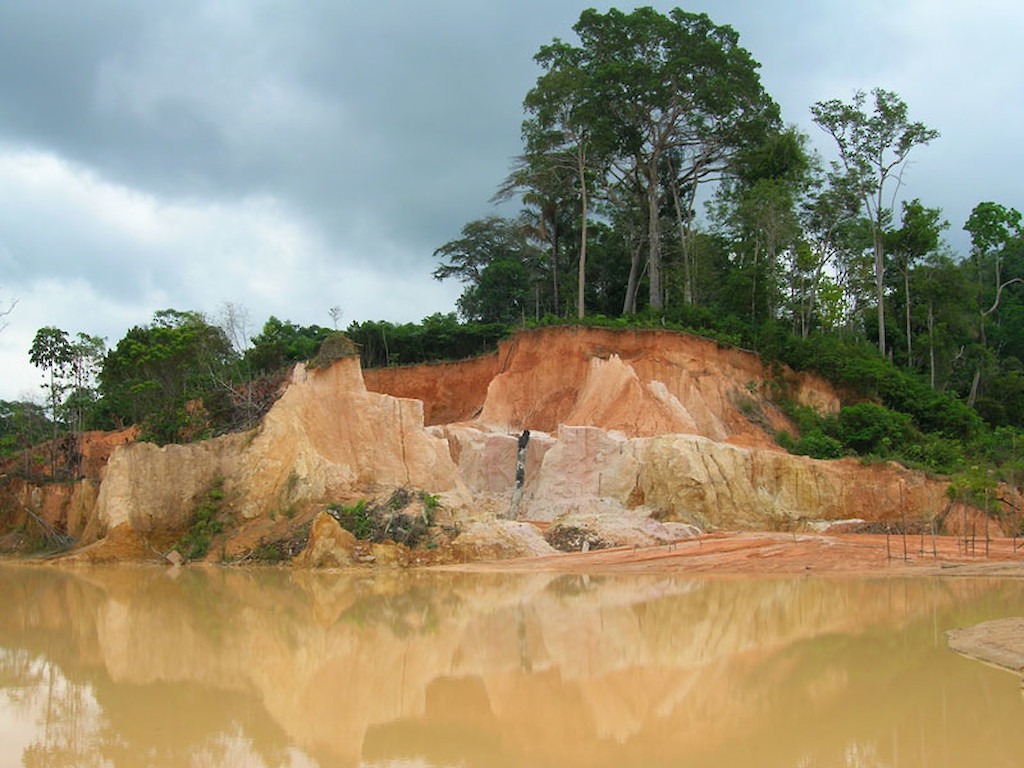 A year ago I was pretty jazzed about Cabral Gold. The company had a tight share structure, a good sized gold resource that was primed to get bigger as CBR incorporated a bunch of historic holes, and a slew of high-grade targets that deserved drilling, all available for an enterprise value of about $4 million.

Unfortunately things haven’t worked out exactly as expected – at least, not yet.

If you want the short version of this catch up, here it is:

That Resource
Pending resource growth by adding historic holes to the count was a part of the investment thesis a year ago. Unfortunately, the resource shrank instead of growing when CBR added the 22,000 metres of neglected historic drilling.

The consultants who did the 2011 resource estimate simply included high-grade results in their model, which is surprising as scattered high-grade results within a resource averaging closer to 1 g/t gold are statistically different. Whether they can be included and how much they influence the estimate of gold in their area depends on how the resource is done. In 2011 the consultants used what’s called ordinary kriging and modeled mineable shapes conforming to an open hit or conceptual underground stope.

This time around, Micon International built wireframes of each deposit and then also used ordinary kriging to estimate grades within. However, Micon performed several statistical tests and determined that outlier high-grade gold intercepts were not sufficiently consistent to warrant inclusion. As such, they recommended capping.

The decision cut the gold count by 57%. Yes: if they had not used top cuts, the new resource at Cuiu Cuiu would have been 6.4 million indicated tonnes grading 1 g/t gold plus 23.3 million inferred tonnes grading 1.7 g/t gold, for a combined count of 1.5 million ounces.

Without top cuts the new resource did in fact grow relative to the old one, by about the amount I expected. The grade also improved, rising from 1.2 g/t gold to 1.7 g/t gold (comparing the larger inferred blocks). In addition the unconstrained resource, which does not require tonnes to fit into a conceptual pit or stope, came in at 2.1 million oz., up from 1.4 million oz. in the 2011 unconstrained resource.

So which number matters? Unfortunately, the smaller number. When you employ independent consultants to complete this kind of work, you have to accept their conclusions.

Taking a step back: the fact that high-grade hits impacted this calculation so much is a microcosm of the larger story at Cuiu Cuiu, where the old goal (in 2011 and 2012) was to outline a large, low-grade gold deposit but the new goal is to find high-grade gold. The project clearly has both. Lower grade mineralization comes in altered shear zones in granitic rocks that carry stockwork and sheeted veins. Some of those veins must be richer and thicker than others; that is what would have created the high-grade hits within the current resource.

Cabral’s goal at Cuiu Cuiu is to figure out the high grade. There is opportunity to figure it out within the defined resource but that’s work for another day. Right now Cabral is focused on the surrounding area, where it has spent the last year soil sampling and auger drilling to identify the best targets.

The Hunt for High Grade
There were a lot of places to test in the effort to define the best drill targets at Cuiu Cuiu. Remember, Cuiu Cuiu was home to the largest placer workings of the Tapajos gold rush, which was the biggest gold rush in the world, and it’s estimated that placer miners pulled 2 million oz. of gold from the project’s streams. Many of the best placer workings are downstream from nothing – no one has identified a source for all the gold.

Part of the reason was certainly accessibility. The Tapajos was largely inaccessible until the Brazilian government ran a highway north-south through the region 15 years ago. The highway has changed the game for explorers: Cuiu Cuiu is now a road-accessible project. Cabral started with soil sampling and a magnetics survey. The soils program returned some anomalies, to be sure, but it turned out the results were limited at best.

The problem is that soils do not reliably convey information about what lies directly below. Sometimes soils have been pulled one way or another because of glaciers. Steep topography means soils slide away from their source. At Cuiu Cuiu, Cabral figured out that a lake flooded much of the area historically and deposited a thick sequence of sediments. These transported sediments (shown in blue below) mask any gold that might sit in the rocks below.

Hilltops that remained above the old lake are the only places where the soils at Cuiu Cuiu really tell a story about the rocks below. Everywhere else those transported lake sediments mask the underlying rocks.
Once it figured all of this out, Cabral had to change its approach. It switched to auger drilling, which is percussion drilling that cuts through soils and sediments to test the first tens of metres of bedrock – it’s an ideal way to see through the barrier to the rock below.

Figuring out the lake sediments puzzle and then shifting to auger drilling is a big part of why it took Cabral longer than expected to define drill targets. Those targets are now ready, though, and carry more confidence than they might have if Cabral had rushed into drilling six months ago.

The yellow dots are all drill targets. The white dashed lines outline the areas that produced placer gold; arrows identify areas where there is no known source for the placer gold. The black arrows show drainage direction (which way the water flows). And the yellow areas are the deposits at Central, Moreira Gomes, and Jerimum de Baixo.

Here’s another map of the same area, this time showing magnetics. Mag matters because the host rock is a strongly magnetic granite. The darker areas are magnetic lows – corridors where the rock has been altered to be not magnetic. Such alteration can happen because of gold-bearing fluids.

The stack of demagnetized east-west corridors up the east side of the map is interesting, especially because Cabral has collected high-grade gold rock samples or auger drilled into gold-in-basement at many spots along those mag lows.

There are clearly a lot of targets. I will not go through each one, but will focus on the first few being tested.

The first target to see proper drilling is Machichie. Cabral has already completed six holes into the prime gold target at Machichie and is now testing Machichie East, which is prospective for copper, gold, and molybdenum and has an associated chargeability high.

The main target at Machichie returned surface channel samples up to 52 g/t gold over 0.9 metres and 23.8 g/t gold over 1.4 metres. The area returned a grab sample as strong as 356 g/t gold. The area has never been drilled. Cabral punched five holes into the main east-west structure from three drill pads along 275 metres strike. A sixth hole tested a converging northeast-trending structure that generated a surface sampling result of 19 g/t gold. Those holes are now at the lab.

Next the drill will move to Quebra Bunda, which is about 1 km to the northeast. QB has many of the same signatures: it is on the flank of a prominent east-west-trending mag low, soil sampling defines a coincident anomaly, and Cabral’s auger drilling program found gold and pyrite grains in bedrock along 365 metres of east-west strike (open in both directions).

Moreover, artisanal miners recently dewatered a placer pit from the 1970s, which gave Cabral the chance to see the bedrock. A subvertical shear zone cuts the southern wall of the pit. The shear zone is narrow at its top, which is similar to the nearby Palito mine where high-grade shear zones are very subtle at surface. This shear zone got wider with depth, reaching 1 metre across and showing abundant iron staining and quartz veins.

And a composite rock chip sample across this lower part of the vein returned 3,727 g/t gold (yes, that’s better than 100 ounces per tonne).

The QB area has never been drilled. The closest historic drilling was at the Ivo prospect, more than a kilometer to the west. A hole there testing the magnetic low closest to QB showed strong hematite alteration; that matters because mineralized structures in the Tapajos often transition from hematite alteration to quartz-sericite alteration (which carries the gold) along strike.

There are lots of reasons to be excited about the potential at QB.

There’s also an exciting idea that Cabral will test at Moreira Gomes. The resource there currently sits at 6.7 million indicated tonnes grading 1.36 g/t gold plus 1.9 million inferred tonnes averaging 1.77 g/t gold. That’s fine, but in recent months a consultant went through the data from MG and came up with a very interesting theory that the deposit includes high-grade structures that have not yet been recognized.

The idea stems from a few high-grade hits within the resource, a few others outside of the resource that were a bit too distant to be included, knowledge of northeast-trending structures in the area, and the fact that core from these disparate high-grade hits are identical, even when the drill intercepts are hundreds of metres apart and on different northeast structures. This isn’t a concept Cabral is discussing widely yet, as they would prefer to prove their idea right before revealing it, but if they are correct then MG could transform into something much more exciting in a pretty short period of time.

Long story short, Cabral is now doing the drill program that has the potential to reveal a high-grade discovery. They say Where there’s smoke, there’s fire and there is a ridiculous amount of smoke at Cuiu Cuiu. There is no guarantee that Cabral will find the fire in this first program but drilling is the way to do it and that is now underway.

I should also note: the auger drilling program also highlighted the potential to grow the main resource at Central. The current resource covers less than half of the area that returned better than 0.1 g/t gold from top-of-bedrock chips and that auger-defined zone connects the Pau de Merenda target to the northwest with the Mutum discovery and then the Central deposit and all the way southeast to the Central SE target, which has returned some stellar grades in auger drilling (including 27 metres of 6.9 g/t gold).

At some point it will make sense for Cabral to follow up on this opportunity, but not right now. For the moment the focus is on demonstrating that Cuiu Cuiu has high-grade gold alongside the million ounces of low-grade gold already defined.

Finally: Cabral has the money to complete the current drill program. Its share structure remains very tight, with 39 million shares outstanding, and management owns 32%. A tight structure like that creates potential for a big share price reaction should Cuiu Cuiu give up a discovery.

I will admit that I was getting impatient with Cabral in the second half of 2018 but I realize now the team took the extra time to ensure its targeting was done right. I am very content to continue holding CBR. And for those who do not yet own the stock, I think it is a strong speculation at current levels.

GWEN PRESTON’S EDITORIAL POLICY AND COPYRIGHT: Companies are selected based solely on merit; fees are not paid. This document is protected by copyright laws and may not be reproduced in any form for other than personal use without prior written consent from the publisher.