The analysts at Scotiabank made a nice argument that copper is set up for a near-term rally and backed up their argument with a collection of charts. I am absolutely bullish on copper in the medium term, as I am confident a supply deficit looms unless the entire world goes into a significant recession.

But I thought I’d go through Scotia’s argument about the near term, as food for thought.

Setting the stage: worries about global trade wars and slowing growth in China have punished the price of copper, which is now down 19% since mid-summer. 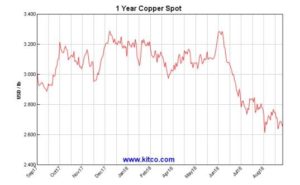 Copper is the second-worst performing metal in 2018 year to date; only zinc has fallen further, but it did so after making immense gains in the previous 18 months.

Scotia’s analysts think there’s reason to think copper is doing better than its spot price suggests…which if true would mean the spot price is set to soon play catch up.

First, copper inventories on the London Metal Exchange have declined sharply since April. The same is true in Shanghai, where warehouses have seen similar drawdowns. Both suggest demand remains robust.

Another good way to test the waters of copper demand is to see how much of a premium over the spot price traders are paying to get their hands on high quality copper cathode today. In Shanghai, those copper cathode premiums have risen substantially over the last two months, from US$68 per tonne in July to US$90 per tonne today.

In general, higher premiums indicate rising demand for copper in China, which makes sense in light of the restrictive tariffs Beijing recently placed on imports of scrap copper from the US.

To me, copper is a market where today’s macro anxieties have overwhelmed tomorrow’s strong fundamentals. That will not last long because copper is such an active market.

The world consumes 21 million tonnes of the red metal each year, a scale that means copper traders are buying and selling for their clients every day, no matter what pundits, politicians, or investors might be thinking.

Anxieties can drive the spot price, as investors play the speculative side of copper. But underneath those actions, traders are paying what they need to pay – such as a $90-per-tonne premium – to get the metal they need. When investor sentiment and trading realities diverge, like they have right now, it’s only a matter of time before reality catches up.

I added First Quantum Minerals (TSX: FM) to the Maven Metals portfolio recently because I wanted a stock with clear leverage to a rising copper price, which is what I expect over the next few years. With negative sentiment around global growth and trade having punished copper prices of late, now is an even better time to buy FM, with an eye to hold for months to years.

MiningIR host a variety of articles from a range of sources, our content, while interesting, should not be considered as formal financial advice. Always seek professional guidance and consult a range of sources before investing.
James Hyland, MiningIR
tags
Copper, Gwen Preston
Share