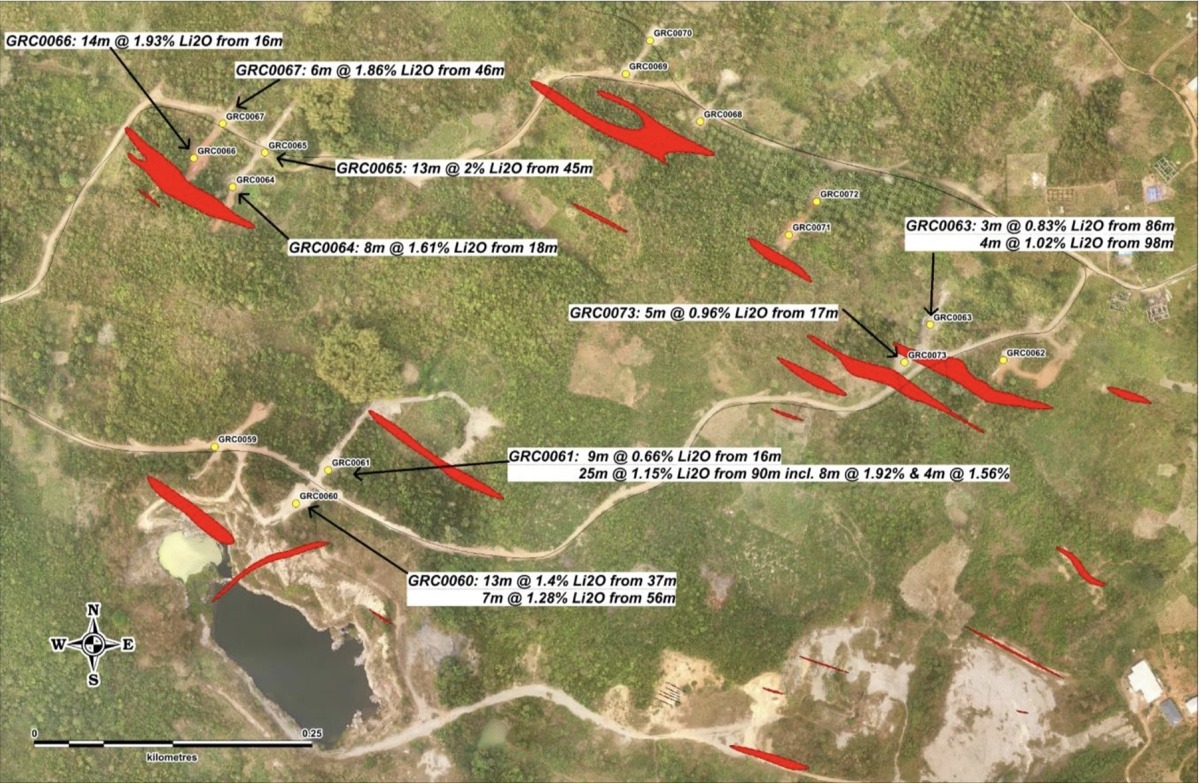 “Drilling results continue to confirm that Ewoyaa is a significant discovery, which is high-grade and spodumene dominant; the preferred feedstock for end users.

“Located within 100km trucking distance of an operating deep-sea port and within 1km of a bitumen highway, Ewoyaa is well positioned to benefit from existing infrastructure.

“In addition, the project is situated in the favourable, pro-mining jurisdiction of Ghana, which is ideal for the future development of the Cape Coast Lithium Portfolio.

“Confirmation of grade and continuity of mineralisation between 50m spaced cross-sections within the Central Zone of the main Ewoyaa deposit is very positive and bodes well for future resource estimation, as well as simplicity of mine design and process flow-sheet.

“Ongoing mineralisation discovery within the immediate project area, including new pegmatites at Ewoyaa and Abonko and step out drilling extending the known high-grade mineralisation at Ewoyaa an additional 250m of strike is highly encouraging.

“The recently discovered high-grade spodumene dominant pegmatites at Abonko, and around Ewoyaa, is significant as it adds further resource scale potential.

“Field teams have finalised metallurgical sampling, with 427kg of diamond drill core being dispatched to Nagrom laboratory in Perth for preliminary metallurgical test-work with initial results expected in the coming months.

Final assay results have been received for the second phase RC drill programme completed during December 2018. A total of 44 drill holes for 4,684m of RC drilling was completed at Ewoyaa and Abonko.

Drilling was designed to test mineralisation continuity within the known Ewoyaa deposit footprint for resource estimation, also testing strike extensions at Ewoyaa where mineralisation was/is still open and to test newly defined targets at Abonko and peripheral to Ewoyaa where mapping and pitting had defined pegmatite targets (refer Figure 1).

Infill Resource Drilling:
Drilling intersected multiple spodumene mineralised pegmatite intervals across the Ewoyaa and Abonko target areas with all intersections listed in Table 1 (minimum 3m intersection length, 0.4% Li2O cut-off to pegmatite contact and a maximum 4m internal dilution) and on Figure 2 and Figure 3. All drilling results to date are shown on Figure 6.

Exploration Drilling:
Exploration drilling of new pegmatite targets defined in pitting peripheral to the Ewoyaa deposit (refer RNS of 10 December 2018) returned mixed results with new weathered and spodumene lithium pegmatites intersected in 40% of holes drilled (refer Figure 2). Importantly, new spodumene pegmatite trends were intersected outside of the known main Ewoyaa deposit, demonstrating the potential for additional resource upside within the immediate project area, and in addition with the Abonko target. Highlights from the Ewoyaa exploration drilling include:

Exploration drilling of pegmatite targets defined at Abonko intersected high-grade, spodumene dominant pegmatite intervals within three of the five targets tested (refer Figure 3). Intervals are narrower but generally higher grade and visually coarser grained spodumene in RC drill chips and outcrop, than those intersected in Ewoyaa, and will likely form valuable high-grade satellite deposits to the main Ewoyaa deposit. Highlights from the Abonko exploration drilling include:

Concurrently Ground Penetrating Radar (‘GPR’) has been trialled to assess its use as an exploration tool to seethrough weathered cover to define new pegmatite targets as well as better define dips of pegmatite targets defined in pitting prior to drill testing. The trial has proved successful in that GPR can be used to map depth of weathering over the Ewoyaa deposit to assist in geological modelling, as well as defining direct geophysical‘reflector’ targets which may represent pegmatites to depths up to 30m below surface in some instances (referFigure 5).

Metallurgical sampling of the completed diamond drill holes (refer RNS 31 January 2019) has been completed and 427kg of diamond drill core currently being air freighted to Nagrom laboratory in Perth, Western Australia for preliminary metallurgical test-work. Results from the initial test-work are expected in the coming months.

The Board is pleased with the progress that the Company has made to date and looks forward to keeping shareholders updated as further news becomes available.

Competent Person Statement:
Information in this report relating to the exploration results is based on data reviewed by Mr Lennard Kolff (MEcon. Geol., BSc. Hons ARSM), Chief Geologist of the Company. Mr Kolff is a Member of the Australian Institute of Geoscientists who has in excess of 20 years’ experience in mineral exploration and is a Qualified Person under the AIM Rules. Mr Kolff consents to the inclusion of the information in the form and context in which it appears.

IronRidge Resources is an AIM-listed, Africa focussed minerals exploration company with a lithium pegmatite discovery in Ghana, extensive grassroots gold portfolio in Cote d’Ivoire and a potential new gold province discovery in Chad. The Company holds legacy iron ore assets in Gabon and a bauxite resource in Australia. IronRidge’s strategy is to create and sustain shareholder value through the discovery and development of significant and globally demanded commodities.

Ghana
The Company entered into earn-in arrangements with Obotan Minerals Limited, Merlink Resources Limited, Barari Developments Limited and Joy Transporters Limited of Ghana, West Africa, securing the first access rights to acquire the historical Egyasimanku Hill spodumene rich lithium deposit, estimated to be in the order of 1.48Mt at 1.67% Li2O and surrounding tenements. The portfolio covers some 684km2 with the newly discovered Ewoyaa project including drill intersections of 128m @ 1.21% Li2O from 3m and 111m @ 1.35% Li2O from 37m, and a further identified 20km strike of pegmatite vein swarms. The tenure package is also highly prospective for tin, tantalum, niobium, caesium and gold, which occur as accessory minerals within the pegmatites and host formations.

Australia
Monogorilby is prospective for province scale titanium and bauxite, with an initial maiden resource of 54.9MT of premium DSO bauxite. Monogorilby is located in central Queensland, within a short trucking distance of the rail system leading north to the Port of Bundaberg. It is also located within close proximity of the active Queensland Rail network heading south towards the Port of Brisbane.

May Queen is located in Central Queensland within IRR’s wholly owned Monogorilby license package and is highly prospective for gold. Historic drilling completed during the 1980s intersected multiple high-grade gold intervals, including 2m @ 73.4 g/t Au (including 1m at 145g/t), 4m @ 38.8g/t Au (at end of hole) and 3m @ 18.9g/t Au, over an approximate 100m strike hosting numerous parallel vein systems, open to the north-west and south-east.

Wholly owned Quaggy contains highly anomalous platinum, palladium, nickel, cobalt and copper exploration targets and is located in Central Queensland, within a short trucking distance of the dormant rail system to the Port of Bundaberg. It is also located within close proximity of the active Queensland Rail network heading south towards the Port of Brisbane.

Gabon
Tchibanga is located in south-western Gabon, in the Nyanga Province, within 10-60km of the Atlantic coastline. This project comprises two exploration licenses, Tchibanga and Tchibanga Nord, which cover a combined area of 3,396km2 and include over 90km of prospective lithologies and the historic Mont Pele iron occurrence.

Belinga Sud is Located in the north east of Gabon in the Ogooue-Ivindo Province, approximately 400km east of the capital city of Libreville. IRR’s licence lies between the main Belinga Iron Ore Deposit, believed to be one of the world’s largest untapped reserves of iron ore with an estimated 1bt of iron ore at a grade >60% Fe, and the route of the Trans Gabonese railway, which currently carries manganese ore and timber from Franceville to the Port of Owendo in Libreville.

Preparing your portfolio for a gold bull market