China featured even more heavily than usual during the third day of this year’s Mines and Money conference in London, with a keynote presentation on misconceptions about the Belt and Road initiative. 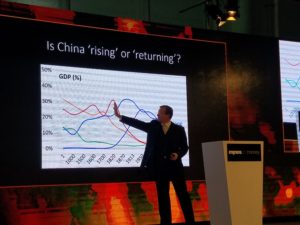 The third day of the four-day Mines and Money (M&M) London conference started with a keynote presentation from Andrew MacLeod, who is a former senior official at the UN responsible for emergency aid coordination in conflict and natural disaster situations, and is currently a non-executive director at Cornerstone Capital and visiting professor at Kings College London.

In a tour de force presentation, Professor MacLeod reminded delegates that white Anglo Saxon domination of the global economy is a relatively recent phenomenon, and for most of the past 2,000 years it was Asia (specifically China and India) that dominated global output.

The reason for this, Professor MacLeod explained, is that before the industrial revolution in Europe, productivity was similar everywhere, so large populations produced large economies. When human productivity was skewed by machines it allowed Europe and North America to overtake the Asian economies.

China, and to a much lesser extent India, started to reassert their economic position from the 1950s, when knowledge was shared (and ideas implemented globally). This rebalancing is “unstoppable”, according to Professor MacLeod ­— although he is pessimistic about India’s ability to expand its economy because of the huge levels of bureaucracy.

European culture is not alert to this transition, and Professor MacLeod commented that “humans are not good at accepting change” and gave several illuminating examples of failures to recognise important transitions. These included the still widespread view in Europe of Africa being a risky place to do business. This opinion is not shared by China, which is targeting the continent as part of its initiatives to grow the economy.

Professor MacLeod noted that Beijing’s Belt and Road initiative was not about providing links to Europe. The most important target for China is the burgeoning market in Africa, and infrastructure projects there are designed to ease access to Chinese goods. Amongst all these initiatives, Europe is being side lined.

Professor MacLeod concluded by stressing that Asian dominance of the global economy is the norm, it is just returning to the position it held before. The dominance of White Anglo Saxons since the mid-19th century was, in effect, just a spike. He asked delegates whether their companies were ready for the transition; did they understand the cultures and communities? These attributes are not factored into share prices, so, as a result, those that are ready for the transition, are undervalued. 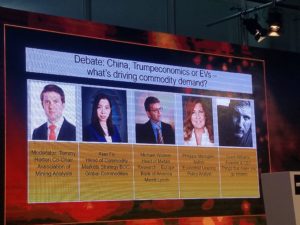 This keynote presentation was followed shortly afterwards by a panel discussion on a related issue; what is driving commodity demand? In a session moderated by Tommy Horton, the co-chair of London’s Association of Mining Analysts, the panellists were Xiao Fu of Bank of China International, Michael Widmer of Bank of America Merrill Lynch, the author and economist Philippa Malmgren and Grant Williams, the founder of Things that make you go Hmmm.

Ms Malmgren, who used to work at the White House, commented that China and ‘Trump-Economics’ were linked. Numerous deals were “in play”, she said, and President Trump is the first US leader to have been willing to surrender territorial influence. China is filling this vacuum as it focuses on stability and moving its economy from one based on quantity to one based on quality.

Singapore-based Mr Williams (who also co-founded ‘Real Vision Television’) cast doubt on the speed of implementation of electric vehicles, commenting that falling oil prices would extend the attraction of petrol-diesel engines. Ms Fu agreed, saying although BOCI was excited about EV and battery metals, this was probably a 5-10 year play.

Mr Widmer added that the cost-effectiveness of EVs still had to be proven, and government incentives were likely to continue being required. He was also rather pessimistic about metals-price forecasts for 2019, noting that the current bull market might not be sustainable because of economies that were slowing in the US, flat in Europe and uncertain in China.

Get more news and updates from Mines and Money London.

MiningIR host a variety of articles from a range of sources, our content, while interesting, should not be considered as formal financial advice. Always seek professional guidance and consult a range of sources before investing.
James Hyland, MiningIR
tags
Asia, China, Economy, Mines, Mines and Money, Singapore
Share