Having spent several years in academia researching tropical weathering profile geochemistry, Goldsource’s current Eagle Mountain project is of special interest to me. The company (TSX:V – GXS) are based out of Vancouver with licences for gold production in the Co-operative Republic of Guyana and for coal in Saskatchewan.

Alluvial gold has been exploited in the Eagle Mountain area since at least the 1880s, with commercial exploration starting at Eagle Mountain in the period 1947-1948 (Anaconda British Guiana Mines Ltd). The Geological Survey of Guyana, which eventually became the Guyana Geology and Mines Commission, carried out a number of subsequent exploration phases at Eagle Mountain until modern systematic exploration commenced in 1988 (Golden Star Resources Ltd).

in 2014, the company released a PEA report with an inferred gold hosting zone (hosted by saprolite (oxide) and “fresh” (non-oxidized) rock) of 20,635,000 tonnes at 1.19 g/tonne gold (for 792,000 OzAu-eq). which sounds like a low grade for those of us used to hard rock vein and porphyry numbers, but the ease of strip mining surface weathering profiles, simplified gravity separation and high recovery makes them potentially cost effective when managed properly.

The underlying geology of the deposit is unsurprisingly (to any budding palaeogeographers) similar to the better known greenstone belts of West Africa which famously host weathering profile deposits across mineralised granodiorite intrusions, granitoid fascies shear zones and their associated faults. Just like across the Liberian transfer zones this Archean craton was sheared in the deep crust, uplifted several times and then further intruded by a series of maffic and ultra maffic magmas post mineralisation.

This recogniseable geology means the exploration at Eagle Mountain should progress quickly using existing African exploration models and although the geology is challenging to predict (its unreliability is often its most reliable feature), targeted drilling will likely see the subsurface deposit expanded. The company have secured private placements and confirmed their 2018 program of exploration in Guyana and the project seems to be a solid one.

Goldsource also hold a license for coal exploration North East of Hudson Bay in Saskatchewan. Their geological model announced in 2011 suggests initial coal resources of 79.1 million tonnes indicated, 34.9 million tonnes inferred. The coal has an average calorific value similar to the major producers of the Alberta Plains and the Powder River Basin. It sits c.80m below the ground in a conformable horizontally bedded lens that could potentially be mined by open pit, should the value and demand allow.

I’m a big fan of laterites and weathering profiles so may be a little biased towards liking Goldsource’s Eagle Mountain project, the only question of worry regarding strip and surface mining like this is an environmental one. Often low grades and thin soil coverage mean you’re effectively clearing vast areas of forest for the sake of low tier damaging production and we have to flip a coin between the ancient tropical forest and our love of gold. I haven’t seen any of Goldsource’s data on this so, they might be doing it fantastically and I’d love to read more, I will certainly update this article when I can!

From an investor’s perspective the company have a 43-101 for their coal in Canada and are producing small amounts already from their Guyana deposit. Any potential losses from bedrock exploration should be offset by the easily recoverable surface gold so, I’d say a reliable prospect with the potential to grow if gold price allows.

We caught up with Ioannis Tsitos (company president and CEO) at PDAC in Toronto to see where they’re heading in 2018: 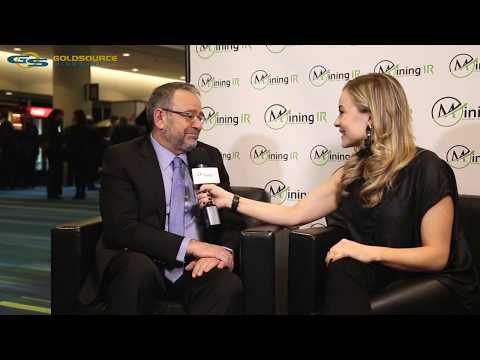 MiningIR host a variety of articles from a range of sources, our content, while interesting, should not be considered as formal financial advice. Always seek professional guidance and consult a range of sources before investing.
James Hyland, MiningIR
tags
Gold, Guyana, PDAC2018, TSXV
Share