Universal Copper Ltd.  is pleased to report drill results from the first three of five holes of the Spring 2022 diamond drilling program at the Company’s flagship Poplar Copper Deposit (“Poplar”), located southwest of Houston, British Columbia (Table 1).  All drill targets in the Poplar copper-gold exploration district are shallow and road accessible, within 88 km of rail infrastructure.

Clive Massey, Universal Copper’s CEO, stated: “A second, significant open-ended, copper intercept in the bottom 216 metres of drill hole 137, one hundred and twenty-five metres NE of drill hole 135 further supports our new interpretation that the system is tilted and that the high-grade zone plunges eastward. Today’s results represent the newest of four H1 2022 releases to-date reporting robust copper grades, as we continued to push the copper mineralization both outward and to depth from the known core mineralized zone.  The strong mineralization in Hole 137 follows up on the January 18th, 2022, January 25th, 2022, and March 23, 2022 reported intersections.  Universal Copper is focused on leveraging our new exploration model and building the Poplar Project into a premier deposit in a metal endowed, road/rail accessible emerging exploration district in a top-tier jurisdiction”.

Because of the disseminated nature of the mineralization at the Poplar Deposit, it is not possible to make a statement as to the true width for holes 22-PC-130, 22-PC-130B and 22-PC-137.

The 2022 Poplar drill holes were designed to: a) follow-up on the 0.546% copper over 129 metres discovered in the bottom of 21-PC-135; b) expand the higher-grade portion of the known mineralization to the northwest and c) test the first of the Vector Geological Solutions targets identified from their early 2022 targeted core logging initiative announced on January 13th, 2022.

Hole 22-PC-137 successfully extended mineralization encountered in 21-PC-135 over 125 metres toward to the northeast and mineralization in these two holes remains open at depth (Fig.1; Fig. 2). It is encouraging that copper grades in PC-68 and PC-42 increase over their lower portions as shown in Figure 2 – Section 5987075N, where they cut the top of a northeast plunging zone of mineralization.

Recent geological modeling by Universal Copper’s technical team demonstrates that portions of the Poplar Deposit are rotated significantly, and the company intends to extend historic drill holes such as PC-67 and PC-42 to intercept these newly recognized low angle mineralized geometries. 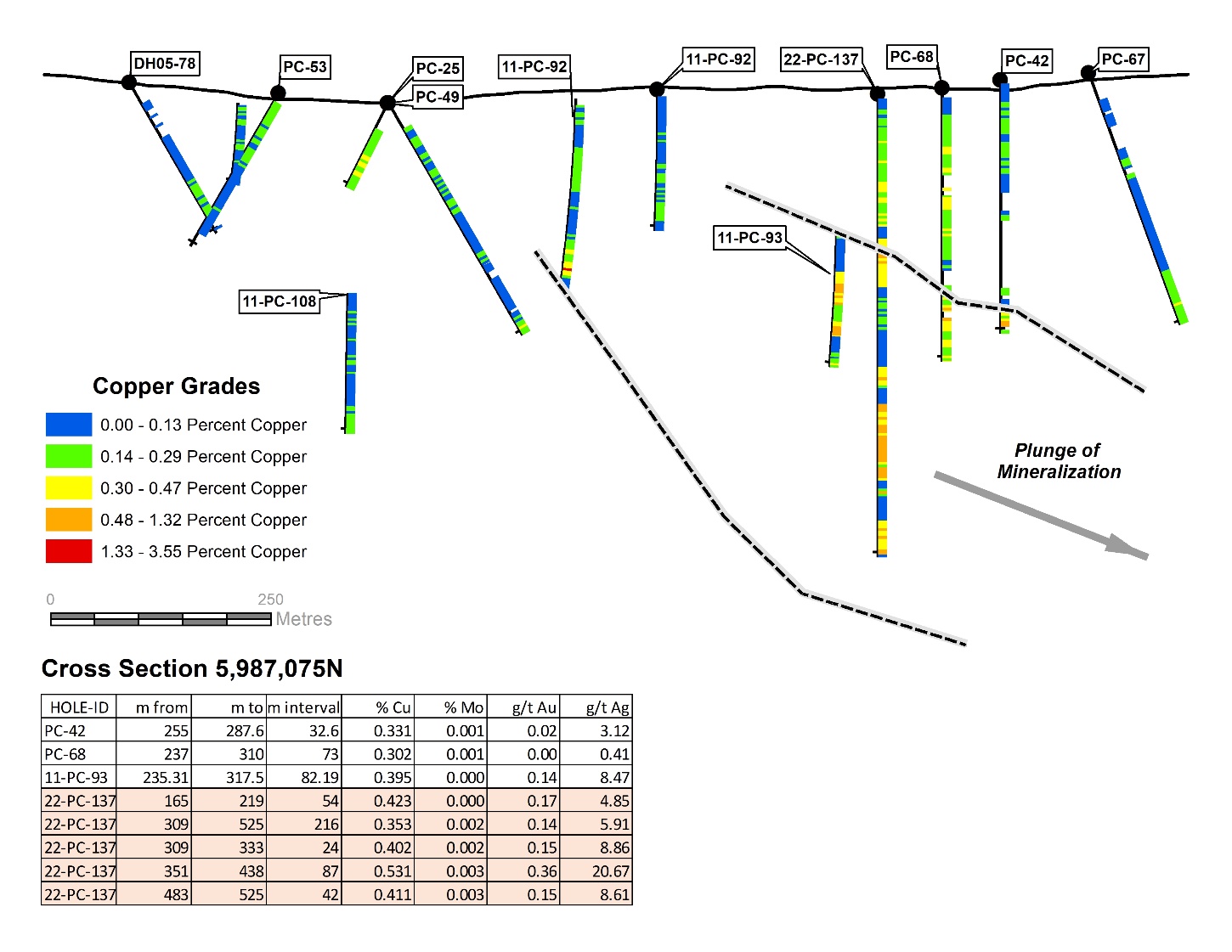 Potassic alteration (biotite and K-feldspar) of varying intensity and silicification were noted throughout 22-PC-137, with sodic-calcic and sericite alteration increasing with depth. There is a considerable volume of post mineralization dikes in hole 22-PC-137, which was also noted in the earlier 2021 drilling within the East Zone, with roughly 25% of the hole intersected late dykes of various widths and compositions.

Mineralization in hole 22-PC-130 consists of disseminated pyrite and chalcopyrite, quartz veinlet pyrite, chalcopyrite and local molybdenite. Alteration consists of moderate to intense potassic, silicification and sericite throughout the hole.

The ongoing data compilation and targeting programs continue to leverage decades of work in the district. These programs are nearing their conclusion and progress report is anticipated early Q3.

The entire length of core for 22-PC-130, 22-PC-130B, 22-PC-137 was sawn and sampled at continuous 3 metre or less intervals, with a few samples taken at shorter or longer intervals based on apparent lithological, alteration or mineralization contacts. The program was supervised by independent geologist Ray Wladichuk, P.Geo. Half of the core was bagged, sealed and securely stored until shipment to the laboratory. The other half was retained in a secure storage location. Certified reference standards, a certified reference blank, and sample duplicates were placed in the sample stream of each drill hole alternating at every 10th to 18th interval. The secured and sealed samples were packed into rice bags, sealed and securely stored until they were turned over to the local trucking company for transport to the ALS prep lab in Kamloops, B.C. with the prepared pulps subsequently sent to the ALS Mineral Laboratory (“ALS”) in North Vancouver, B.C. The North Vancouver lab holds an ISO/IEC 17025:2005 accreditation.

In addition to Universal’s third-party standards, a routine quality assurance/quality control (QA/QC) procedure monitored the analytical quality at the lab. Certified reference materials (CRMs), pulp duplicates and blanks were inserted into each lab batch of samples. The Universal and ALS Lab QA/QC data showed no irregularities.

Poplar lies in a historic mining region, located 35km from the Huckleberry Mine and 42km from Equity Silver Mine, where low snowfalls will allow year-round work. The road accessible property is bisected by a 138 Kva Hydro electric line and lies 88km from the rail head at Houston and 400km from the deep-water port at Prince Rupert by rail.

The technical content of this New Release has been reviewed and approved by R. Tim Henneberry, P. Geo (BC) a member of the Company’s Advisory Board and a Qualified Person under National Instrument 43-101.

Universal Copper Ltd. is a Canadian-based copper exploration company focused on the acquisition and exploration of copper properties. The Company’s management team has many years of experience in exploration, finance, and efficient public company management. Universal’s current focus is on advancing the Poplar Copper Project, one of the most advanced pre-production copper projects in British Columbia with a historic 43-101 resource.