Bharat Parashar, CEO of Ceylon Graphite tells us about how low the cost is to bring their high-quality vein graphite to market as they edge ever closer to production in 2019. Although much rarer than other forms of graphite such as amorphous or flake graphite, the high quality of the vein graphite deposits in Sri Lanka has been known for hundreds of years and requires substantially less processing. 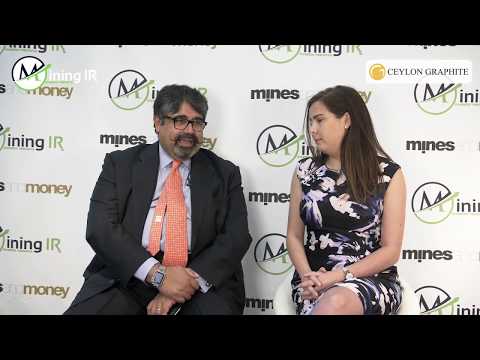 Ceylon Graphite has the largest exploration landbank for graphite in Sri Lanka, with over 120 km grids which had previously been used for graphite mining. They currently have four active projects in Sri Lanka at different stages of development. Uses of graphite include batteries, electrodes, refractories, brake linings and lubricants.

Find out more about Ceylon Graphite

Ceylon Graphite is a public company listed on the TSX Venture Exchange (CYL:TSX-V) currently exploring and developing graphite mines in historic resource jurisdictions in Sri Lanka. It holds a land package constituting 121 km² grids containing historic vein graphite deposits. These unique and comparatively higher margin vein (lump) deposits currently make-up less than 1% of the world graphite production. These exploration grids represent the majority of known historic graphite resources in Sri Lanka. The relevant areas in which these grids reside have previously had historical production dating back to the 1920’s and 1930’s.

MiningIR host a variety of articles from a range of sources, our content, while interesting, should not be considered as formal financial advice. Always seek professional guidance and consult a range of sources before investing.
James Hyland, MiningIR
tags
Ceylon Graphite, Graphite, Sri Lanka
Share