Forum Energy Metals (TSX-V: FMC) is a multi-metal company focussed on exploration projects across Saskatchewan. FMC’s Uranium deposits sit on the edge of the Athabasca Basin, one of the world’s most productive regions where some deposits have produced grades of ≤20% U, thats 100 times greater than global average for economic deposits. [Natural Resources Canada]. Forum has several 100% owned projects and a range of joint ventures with partners including: Cameco, AREVA, NexGen, Rio Tinto and Uracan.

The team includes experienced local Uranium exploration geologists and their focussed approach to the Athabasca Basin means they have a host of regional connections and great potential to expand.

Fir Island (Forum 100%)
Forum’s exploration at Fir Island follows mineralisation trends related to the Black Lake Fault, part of the Snowbird Tectonic Zone which cuts the entire Athabasca Basin and is known to host a range of unconformity hosted U deposits. the licence is located approximately 5km northeast of the community of Black Lake, on the northeast edge of the Athabasca Basin. It is connected by an all-weather road to the provincial highway system, which also provides year-round road access to the Rabbit Lake and McClean Lake mills. The property can be accessed by truck in the winter and by boat in the summer. In 2017 the company completed EM surveys along the East Channel Structure to define drill targets and planned work following the Cathy Fault, which may host hanging wall type mineralisation.

Henday (Forum 40%  – Rio Tinto 60%)
Located in the northeastern margin of the Athabasca Basin near the past producing McClean Lake projects, where five out of nine known uranium deposits were mined by AREVA/ Denison from 1997-2008. Access is by both winter roads or trails connected to Provincial Highway 905 and by air to the community of Points North Landing. The mineralized zones in the McClean trend occur as pods that straddle the unconformity between the Athabasca sandstones and the crystalline basement at an average depth of 160m below the surface.

The nearby Roughrider deposit is a basement rock hosted discovery made in 2008, and later acquired by Rio Tinto in 2012. The Forum/Rio Tinto Joint Venture has identified several high potential geologic targets. Three target areas known as Hollow, Epitaph, and Elephant, were partially drill tested in 2016 and require follow-up work. A final report from Rio Tinto including a geochemical, radiometric, and geological interpretation of the drill results and a subsequent 81 line km DCIP resistivity survey is forthcoming, in addition to recommendations for follow-up exploration.

Janice Lake
Forum optioned a 100% interest in the Transition Metals Janice Lake Sedimentary Copper Property in North-Central Saskatchewan. Located a mere 55km away from several of Forum’s core uranium exploration properties in the Athabasca Basin. Janice Lake’s close proximity enables this project to be effectively integrated into Forum’s operations, while diversifying its exposure to include copper. The high-grade chalcocite mineralization previously discovered from limited drilling by former owners Noranda and Phelps Dodge, remains open in all directions, and has the potential for significant high-grade near surface copper.

MiningIR caught up with Forum’s CEO Richard Mazur at this year’s PDAC conference to see what the company are planning for 2018. 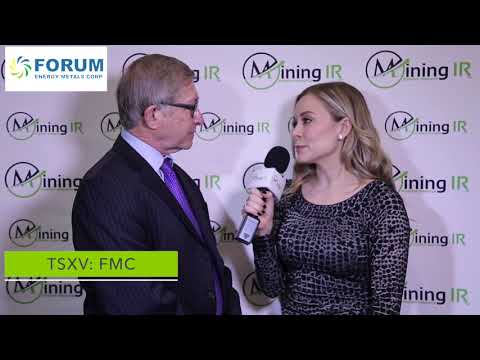 MiningIR host a variety of articles from a range of sources, our content, while interesting, should not be considered as formal financial advice. Always seek professional guidance and consult a range of sources before investing.
James Hyland, MiningIR
tags
Canada, Copper, Forum Energy Metals, PDAC2018, TSXV, Uranium
Share