Goliath Resources Ltd. Are a Toronto based precious metals exploration company with active projects around the prolific Golden Triangle region of British Columbia and Alaska. They hold options to acquire 4 prospective properties, Bingo, Gold Digger, Lucky Strike and Copperhead. Together they cover an area of over 44,000 hectares.

The exploration model targets geology newly exposed by the retreat of glaciers and snow cover related to global climate change. Many of the properties are virgin exploration projects and could potentially be vast in size, now is the time to get on board if you want to see returns as these licences gain momentum.

2 discoveries have come to light through surface mapping and drift collection at the Gold Digger property. The anaconda vein is arguably the most exciting of the two, traced over 2300m in length and 600m at depth and assayed 22.83 g/t AuEq over 2 metres and 19.08 g/t Au over 1.7 metres, the vein will be bulk sampled in 2018 to investigate the mineralisation further. Nearby within the licence, the ‘Gold Swarm’ discovery is a surface exposed and heavily veined breccia zone showing 3.77 to 21.10g/t gold from outcrop sampling. The gold Swarm alteration zone extends for some 1200m x 150m around the brecciated outcrop and remains unexplored, it could host significant mineralisation depending on the geological evolution of the deposit.

Highly magnetic mineralisation means this deposit is drill ready and will see its first holes this year, following stratabound signatures. So far 83% of the samples taken have contained gold and channel sampling has highlighted two key mineralised zones, with 4.85 metres assayed 1.77 gpt Au – 0.20 % Cu; and 3.20 metres assayed 1.48 gpt Au and 0.37 % Cu. The observed mineralisation is open along strike and Goliath will be hoping further mapping and analysis increases the inferred deposit.

35km southwest from Smithers (B.C., Canada) and to the south of the Skeena Arch Goliath are exploring the ‘Copper King’ trend, running parallel to a major regional fault zone and several granitic intrusions. The company’s initial targeting was based on 2016 data from a 15cm wide chalcopyrite vein containing 13.8% Cu and 228g/t silver in assay. The vein was found to be an offshoot from a coarse volcanosedimentary/tuff sequence, where pyrite and chalcopyrite have replaced the fine grained ash matrix and values from surface chips of arund 0.17 g/t Au, 4.28 % Cu, and 45.41 g/t Ag are pervasive. Large oxidised zones are found in local fault systems containing malachite and massive limonitic breccias.

Historically linked to producing placer deposits which were mined from 1886 to 1940, this region must logically host gold in its bedrock somewhere. Goliath hope to strike lucky, where others have failed with the valley’s maiden drilling program in 2018.

Exploration in 2017 has centred around the Prosperity ‘Bullseye’ Zone in the Skeena Arch. The licence covers a 2.4km x 3.4km region targeted by airborne electromagnetic surveys and soil sampling for porphyry type mineralisation. Results so far have indicated a 2000m x 400m zone of increased magnetic response, with copper, molybdenum and gold anomolies linking up from the soil surveys. Combine this with historic accounts of polymetallic veins and coarse gold nuggets of up to 6 ounces found nearby, this property could yield very interesting results.

Overall, the Copperhead property is my personal favourite in Canada right now. As a geologist myself, it seems the most exciting classic geological deposit with incredible surface exposure, predictable structural controls and an educated guess available as to the source of the mineralising fluids to extend the models further. It may not be the most accessible, most profitable long term or have the highest widespread grades, but it would look great in a textbook and will go firmly to the top of my ‘rocks to see before I’m old’ list.

The range of Goliath stakes, solid financial base and high grades they’re targeting mean they should be a steady bet for investors with the potential to hit a big-time world class deposit always lurking around the corner. Add to this the ‘likeability factor’ of the management and ground team and I think they’re absolutely worth following now and into the future.

the MiningIR team caught up with Goliath’s CEO at this year’s PDAC to discuss their plans through 2018: 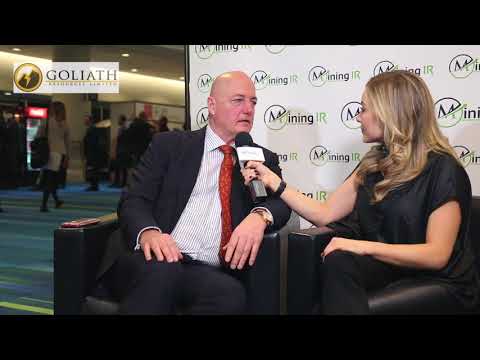 MiningIR host a variety of articles from a range of sources, our content, while interesting, should not be considered as formal financial advice. Always seek professional guidance and consult a range of sources before investing.
James Hyland, MiningIR
tags
Alaska, Canada, Copper, Gold, Goliath Resources, PDAC2018, Silver
Share