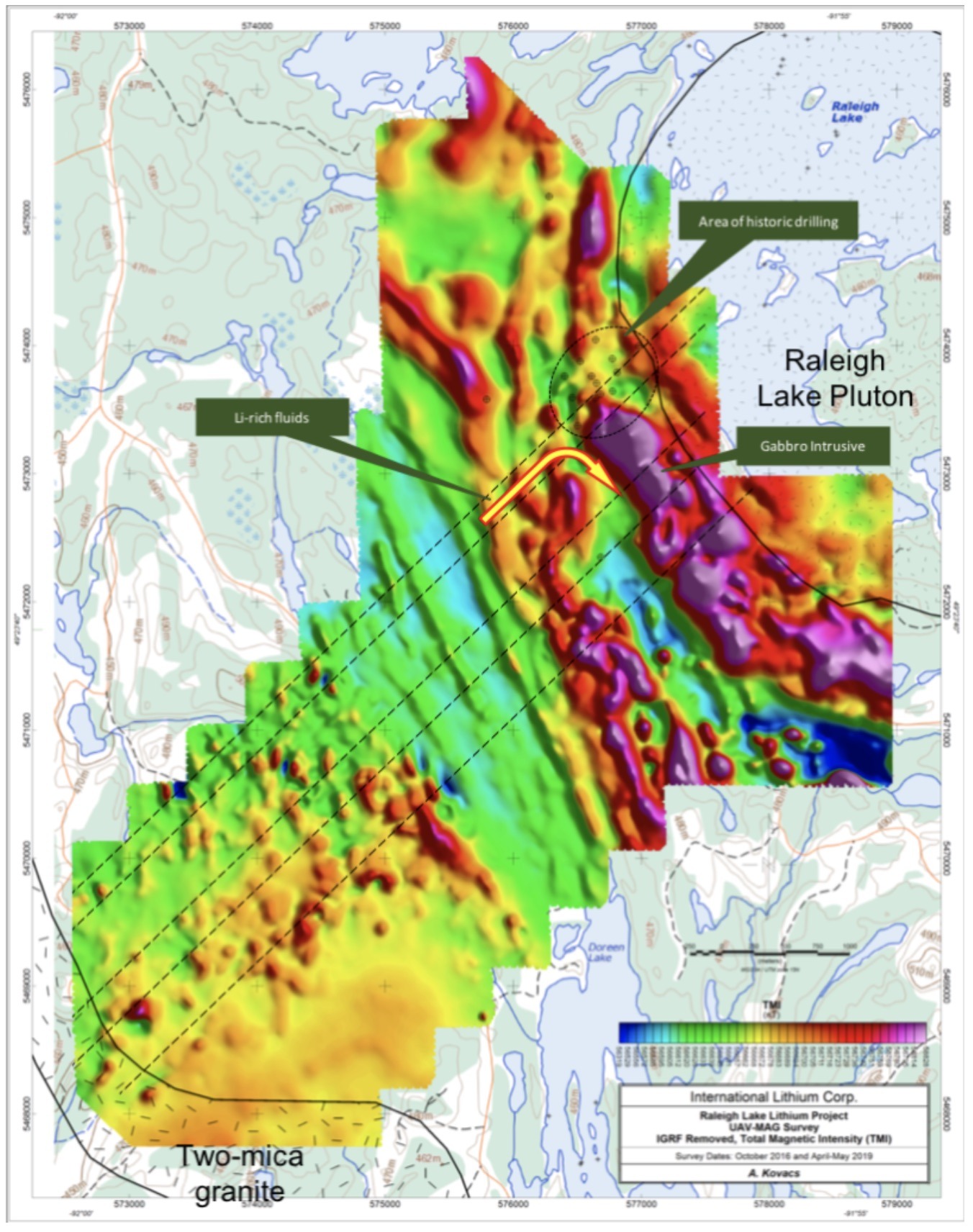 Vancouver’s International Lithium have revealed that they have received the final set of results from UAV-magnetometer survey from their Raleigh Lake project area. The results have confirmed that a geologic body with elevated magnetic response (previously interpreted to be a gabbroic intrusive hosting lithium bearing pegmatites) continues onto the adjacent group of claims which were acquired by International Lithium in 2018.

Of note to investors is the fact that one of the major shareholders in International Lithium is Ganfeng Lithium, the world’s third largest and China’s largest lithium compounds producer. Those with an eye on electric vehicle industry will no doubt be aware that Volkswagen Group announced a strategic cooperation with Gangfeng in April this year, and as we reported in June, had partnered with battery maker Northvolt. As the demand for car makers to secure sources for lithium for their battery production, we expect to see more strategic investments of this nature in the future.

What does the aeromag survey show us?

A map showing a gridded image of the merged data sets is shown above. The magnetic body interpreted to be the gabbroic host to the pegmatites is clearly visible in the eastern-central portion of the map. It measures approximately 3 kilometres by 1 kilometre which is comparable in size to the gabbroic rocks hosting the mineralized pegmatites at the Tanco mine.

Several regional structures can be interpreted from the magnetic image shown. Some of these structures transcend from the Two-mica granite to the Raleigh Lake gabbro. The structures cut the gabbro at its northern terminus, in the vicinity of the historic drilling, and in the central (thickest) portion of the body. No drill holes have tested the main gabbro body and all the historic drill holes at the terminus have intersected spodumene bearing pegmatites that dip gently southeasterly and flatten as they intrude the edge of the gabbro. There is a striking resemblance to the emplacement style of mineralized pegmatites at Tanco making the Raleigh Lake gabbro a highly prospective target. The Company is planning to investigate these interpretations with a proposed 2,000 metre drill program, focusing on stepping out from the known mineralization both along strike to the southwest (toward the Two-mica granite) and down dip into the gabbroic body.

The Two-mica granite is coarsely mapped in at the south-western extent of the survey area. It is thought to be the parental magma source for the spodumene bearing pegmatites at Raleigh Lake. It is located between four and six kilometres from the gabbro indicating that the gabbro is the optimal distance from the magmatic source body for fractionation to favor the crystallization of spodumene, a lithium rich mineral.

Commenting on these results, Chairman and CEO of International Lithium, John Wisbey, said “We are delighted that the magnetometer survey at Raleigh Lake reinforces our belief that the geology is very promising. With an increasing awareness in Canada and the USA of the need for North American self sufficiency in lithium and other battery metals, we are also very pleased that the mineral rights remain wholly owned by International Lithium Corp. with no royalty or encumbrance over the property.

About the Raleigh Lake Project

The Raleigh Lake Project consists of spodumene bearing lithium pegmatites located in Ontario, Canada. The region is host to several lithium occurrences, including the Company’s Mavis Lake joint venture project. The area exhibits excellent infrastructure that includes sealed roads, rail service and electric power. The project is in close proximity to other mining projects, towns and the port city of Thunder Bay offering a skilled labour force and excellent mining related services. The Raleigh Lake Project is owned 100% by ILC, with no underlying royalties,

Location
The Project is located approximately 25 kilometres west of Ignace and 235 kilometres west of Thunder Bay, ON. It is easily accessed by a well-maintained logging roads that branch south from Highway 17 (Trans-Canada Highway) along the Doreen Lake road.

The Company’s primary strategic focus is now on the Mariana project in Argentina and on the Raleigh Lake project in Canada.
The Company has a strategic stake in the Mariana lithium-potash brine project located within the renowned South American “Lithium Belt” that is the host to the vast majority of global lithium resources, reserves and production. The Mariana project strategically encompasses an entire mineral rich evaporite basin, totaling 160 square kilometres that ranks as one of the more prospective salars or ‘salt lakes’ in the region. Current ownership of the project is through a joint venture company, Litio Minera Argentina S. A., a private company registered in Argentina, now owned 85.8% by Ganfeng Lithium and 14.2% by ILC. In addition, ILC has an option to acquire 10% in the Mariana project through a back-in right.

The Raleigh Lake project, now consisting of 3,027 hectares of adjoining mineral claims in Ontario, is now regarded by ILC management as ILC’s most significant project in Canada. It is 100% owned by ILC, is not subject to any encumbrances, and is royalty free.
Complementing the Company’s lithium brine project at Mariana and rare metal pegmatite property at Raleigh Lake, are interests in two other rare metal pegmatite properties in Ontario, Canada known as the Mavis Lake and Forgan Lake projects, and the Avalonia project in Ireland, which encompasses an extensive 50-km-long pegmatite belt.
The ownership of the Mavis Lake project is now 51% Pioneer Resources Limited (ASX:PIO, “Pioneer”) and 49% ILC. In addition, ILC owns a 1.5% NSR on Mavis Lake. Pioneer has an option to earn an additional 29% by sole-funding a further CAD $8.5 million expenditures of exploration activities, at which time the ownership will be 80% Pioneer and 20% ILC.

The Forgan Lake project will, upon Ultra Lithium meeting its contractual requirements pursuant to its agreement with ILC, become 100% owned by Ultra Lithium (TSXV: ULI), and ILC will retain a 1.5% NSR on Forgan Lake.

With the increasing demand for high tech rechargeable batteries used in electric vehicles and electrical storage as well as portable electronics, lithium has been designated “the new oil”, and is a key part of a “green tech”, sustainable economy. By positioning itself with solid strategic partners and projects with significant resource potential, ILC aims to be one of the lithium and battery metals resource developers of choice for investors and to continue to build value for its shareholders.
International Lithium Corp.’s mission is to find, explore and develop projects that have the potential to become world class lithium and rare metal deposits. A key goal is to become a well funded company to turn that aspiration into reality.

Find out more at http://www.internationallithium.com/