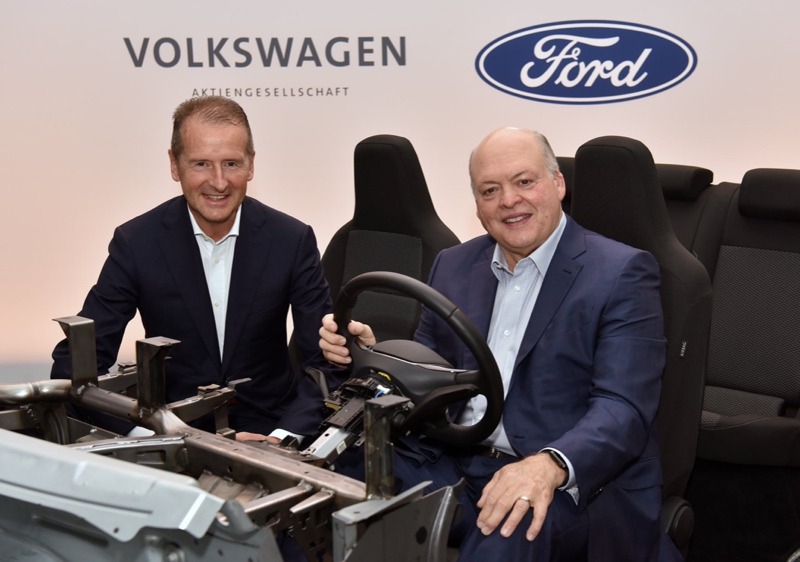 Volkswagen and Ford have announced that they’re expanding their alliance and will team up on both electric vehicles and self-driving cars.

Previously, the two companies had announced that they would team up on EVs, and this expanded alliance has long been mooted.

Of particular interest to those with an eye on battery metals is the fact that Ford has announced it will be bringing a new electric vehicle to European markets in 2023. This vehicle will use VW’s electric vehicle platform, MEB, with an initial production run of 600,000 vehicles planned.

When asked why this new Ford vehicle utilising VW’s platform would only be produced in Europe and not in the US, Ford CEO Jim Hackett commented that this is due to Europe moving faster towards zero emissions, whilst Ford has its own electric vehicle plans afoot in the US.

The alliance will see closer cooperation on self-driving technology, with VW investing $2.6 bn in Argo, ford’s self-driving subsidiary, via $1bn in funding and contributing its own $1.6bn autonomous intelligent driving (AID) company.

Where will the batteries come from?

There was no detail on where the batteries for this VW/Ford vehicle will come from, but only last month VW announced it was investing in a battery factory with Northvolt in Sweden, and also entering a joint venture to construct their own battery factory in Germany.

Will this see an increase in lithium production from within the EU, or will the growth in European battery production still be reliant on lithium sourced from Australia and South America?

Newfoundland in Focus: Ron Struthers wanders and wonders across the region